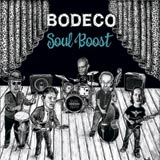 Critical darlings of the ’90s from High View might’ve wound up a novelty act were they not so incredibly good — and schooled — at what they did: mining rock’s origins in boogie-woogie and blues and finding their own way with them. This five-song, mostly instrumental EP piles on enough strut to make Bo Diddley proud.

It’s great hearing Ricky Feather’s aged yelp on “I Ain’t Lyin’” and “Hush Hush, Naughty Baby,” and newcomer-second guitarist Freddie “Southside” Wethington adds extra crunch to Gary Stillwell and Gene Wickliffe’s snake-charmer groove of “Zobop” (started by — what else? — flicking a lighter). Bodeco’s mission closes on the creepin’ moodswing of “Little Joe.” At just over a minute, it’s as if the party has evolved into a 5 a.m. sunrise hang, and only the professionals are still awake.