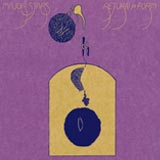 In the hands of mere mortals, three guitars devolve into meaningless self-flagellation. Picture dude-brah’s admiring each other’s licks and wails between high-fives, Mich Ultra and surface discussions of hammer-on wankery.

Wayne Rogers (of Crystallized Movements), Kate “Village” Biggar (Magic Hour) and Tom Leonard (Luxurious Bags), the triple threat of Massachusetts’ Major Stars have been around a fretboard way too long to try to rewrite “Eruption.” On Return To Form, the group’s third album, their compositions are freakish goliaths of distortion that expand, retract and always pay off. “Low Grade” and “The Space You Know” short-circuit where “Only Now The Flames Blow Out” soars, Village’s voice sitting right underneath it all to provide basic verse-chorus structure. Sometimes Stars drop the curtain too soon, as in the end of “Haunting Season,” but by the pogo throb of “Two Degrees” and ender “Run From Me Devil,” you’re too exhausted to care.