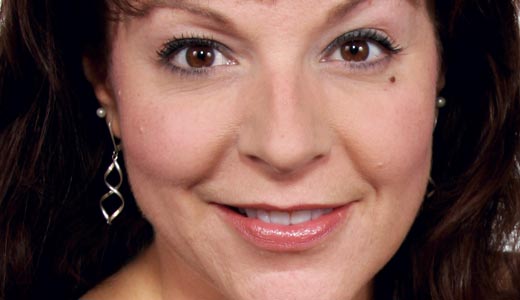 On a seemingly normal day in 2003, Louisville Clear Channel Radio General Manager Bill Gentry was in his office looking at paint swatches, trying to pick out a new color for the walls. The station had just fired John Ziegler and was urgently trying to find a replacement for the morning drive-time slot on WHAS 840 AM. So when Francene Cucinello burst into his office for the first time and picked the right color for him, Gentry’s mind was made up in more ways than one.

Since that time — and until her untimely death at the age of 43 last Friday following a heart attack and brain aneurysm — the New Jersey native’s voice could be heard in cars, offices, homes, bars and factories, from one end of Louisville to the other, and beyond. And the message of that voice, which friends and colleagues generally describe as honest, direct and fearless, touched upon topics of great importance to virtually every Louisvillian who could hear it.

“First and foremost, she was a passionate fireball of advocacy,” fellow WHAS-Radio personality Terry Meiners told LEO Weekly. “She was committed to making changes and questioning people who she thought were hiding things. She wasn’t afraid to kick open a door and say, ‘Let’s all have a look in here.’”

Francene also was committed to helping the “Joe and Jane Sixpacks” of the world via her Job Jam employment seminars, which managed to place about 500 people in jobs during the economic downturn.

“It’s just a massive loss for the people of this city, particularly for those who feel powerless,” said Meiners. “Whatever capacity her spirit is allowed in the new realm she’s assumed, I know she’s still fighting for them.”

Meiners said his friend and colleague never gave an inch in what is largely a male-dominated field, adding, “She made a footprint deep enough that it’ll never be covered over. She blazed her own path as a woman in a business that shuns women.”

Among the approximately 700 people who braved the cold and fog to attend Francene’s memorial service Monday at Southeast Christian Church was her close friend and frequent guest Jacob Payne, chief blogger at Page One Kentucky and The Ville Voice.

“I thought the service was fitting for Francene,” he said. “Obviously, the venue was larger than life — just like Francene.”

Payne credits Cucinello with launching his career as a political commentator, citing her uncanny ability to motivate people to overcome fear and do the things they want to do.

“People know her as this larger-than-life personality on the radio, this big welcoming voice for the average man on the street, a celebrity,” said Payne. “And she was those things. Privately, Francene was a great, pure soul. I want people to remember the kind-hearted Francene who always found the positive, no matter how difficult the scenario. I want people to know how humble and thankful she was.”

What’s more, Payne noted, was that of all the political “big dogs” who showed up for the service, not one of them seized the opportunity for grandstanding.

“I’m telling you that’s strange,” he said. “There was no dog and pony, nobody using it for their own agenda. It’s a testament to the kind of person she was, and hopefully that’s how people will remember her.”

Many of the “big dogs” who often found themselves in Cucinello’s crosshairs were in attendance, including Kentucky Attorney General Jack Conway and Democratic U.S. Rep. John Yarmuth, who was among the few selected to speak about their friend.

“People would say to me, ‘God, Francene was tough on you today,” said Yarmuth, a frequent call-in guest on the show. “I figure if I can handle Francene, then I can just about handle everybody, because she does ask the questions that need to be asked.” Yarmuth — who introduced himself as “Francene’s Friday morning punching bag” — joked that they each had secretly brought football helmets to the town hall health care forum they moderated last year, just in case things got too rowdy.

By the end of his brief eulogy, Yarmuth, like so many others in attendance, was in tears.

In 2008, George hired Francene as a regular columnist in an effort to “rile up our base with her politics.”

“She was a very strong and capable thinker,” he said, “and it came through in her writing. I always found her to be respectful, even when disagreeing, which is something that I think is lost nowadays in our discourse. She was willing to be provocative and didn’t shy away from controversial topics.”

Along with radio and print, Cucinello bounced around several television markets (Baltimore, Nashville, Cincinnati) until she settled on Louisville, which became her adopted hometown, where generosity became part of her daily life.

“I was eating dinner with Francene one night and I got a call that my daughter was hurt,” friend Kelly Galiette said during the service. “Francene insisted on coming to the ER with me. She didn’t have to.”

Kristen Emery, a friend of Cucinello’s for 20 years, said, “Francene packed 100 years of life into 43,” adding, “She’d be mortified that we’ve revealed her age.”

Francene Cucinello is survived by her mother, Margaret, her sister, Janice, and legions of fans who are now without the voice they grew to love. Her family has set up a fund for aneurysm research, dubbed “The Francene Fund,” which can be donated to via any BB&T bank. Those wishing to share their thoughts, feelings and opinions can send them to [email protected]

If you decide to write in, don’t hold back. Francene wouldn’t want it any other way.