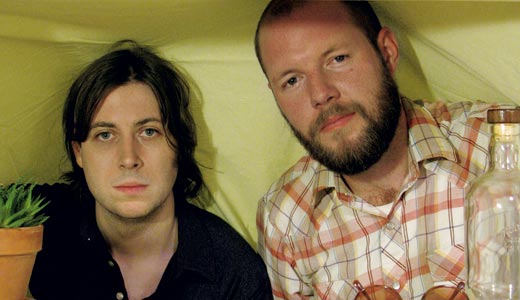 Mountains’ third album was recorded in a Brooklyn apartment.photo by jon leone

Inspiration was all around Mountains, the duo of Brendon Anderegg and Koen Holtkamp. On their third album, Choral, they recorded an Arizona thunderstorm for the song “Telescope.” Relentless rainfall arrives midway through the piece, coating the song’s battery of synthesizers and organs in a tone not unlike TV static. On “Map Table,” more randomness: the dull clink of ice water in a glass, flipping pages of a book. Late in the record, the scattershot bells of “Melodica” suspend any sort of concentration.

The title song is a layer cake of more than 30 tracks of synths, organ and percussion. Per usual, Mountains aims to create not so much traditional songs, but compelling, hypnotic sound sculptures you drive to at your own risk.

They met while attending the Art Institute of Chicago. Holtkamp was born in the Netherlands and has lived in the United States since the age of 3. They exchanged ideas and in 1999 started the Apestaartje label to release their own work. Before Choral was made, Anderegg took a brief detour to study audio engineering in Arizona.

In winter of 2008, they reconvened at Anderegg’s Brooklyn apartment, recording almost all the instruments live, going back only to add the occasional overdub.

“Choral was us kind of coming back together, figuring out how to work together again,” Holtkamp says. “The previous records were a lot more edited and pieced together. This captures the performative aspect of what we do.”

Holtkamp says the two benefited from recording at home for the lack of constraints on studio time and less overhead. “It’s very much a home-recorded album, which in a lot of ways is great. It’s a casual situation.”

Anderegg will play a greater role in engineering the band’s material in the future when he finishes building his new studio.

Joining next Wednesday’s bill are Swedish tourmates Tape. The compositions of brothers Andreas and Johan Berthling and Tomas Hallonsten have in the past been influenced by free jazz and producer/experimentalist Brian Eno. Their new album, Fugue, looks to expand beyond those touchstones. Shedding ringleader Connor Bell has flown solo more or less since 2001, but no longer. He’s added Tim Furnish (Parlour, Crain) and Joey Yates (The Loved) to the mix, and the group has been recording off and on in hopes of a 2010 release. Resonator guitar specialist R. Keenan Lawler adds his 2 cents. That 7 p.m. start is concrete.