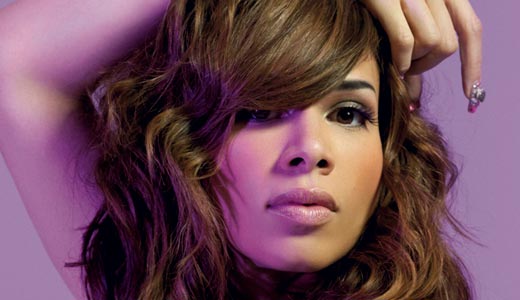 This year’s Halfway to Forecastle event, the rare rave inside city limits, focuses on acts who want to cultivate that scene here.

Kid Sister exploded in 2007 with her debut single “Pro Nails” featuring Kanye West, and suddenly she became the new savior of female emcees. The rapper, born Melisa Young, set the Internet afire with her throwback flow, harkening the playful bounce of Roxanne Shanté and Salt-N-Pepa more than hypersexed Li’l Kim and Foxy Brown. The first draft of her debut album, Ultraviolet, was decidedly more hip-hop, but Young recut it with a house bent, making for one of the more club-friendly albums a major has put out in some time. Since November, it seems every pop record is also tugging house music’s sleeves, from Black Eyed Peas to Ke$ha and omnipresent Lady GaGa.

Kid Sister took some time to talk with LEO following a well-deserved vacation.

LEO: Louisville seems to toy with the concept of a dance music scene but appears dependent on Chicago immigrants to sustain it. Why has Chicago managed to keep a thriving scene, and what do you think it takes to keep it going?

Kid Sister: I mean, it never really went away, but it wasn’t as popular in the early 2000s. That’s when underground hip-hop like Rhymesayers and Def Jux was in effect. Then crunk and Southern rap took over for a while. So no one was really checking for dance. In the late ’90s, early ’00s, though, I was all about Chicago house music. These were the beats that I was always drawn to. I’m not sure, though. In Chicago, house has always been, always will. Now lately it seems that it’s become not as DIY, not as grassroots. You’ve got clubs with bottle service, 21-year-old girls in sequin dresses. It’s just not as cool. Everyone is so focused on being “grown and sexy,” which is more gross than sexy. I am enjoying seeing a resurgence of the legends, like Cajmere, and a whole generation is discovering that music.

KS: I was listening to Cajmere when I was 11, 12 years old. I recently got to do a show with him, and I was like, “I am doing the Percolator on stage with the man who made the Percolator.” It was so cool — a dream come true.

LEO: Every time a female emcee comes out, they are suddenly weighed down with all the baggage and history (politics, sexuality, etc.) of every femcee behind her, while her male counterparts aren’t. Thoughts?

KS: It’s just par for the course. It’s part of the deal. It doesn’t bother me. I mean, I’m so blessed to be doing this for a living.

LEO: How has your life changed since the release of the album?

KS: It’s gotten busier. I’m doing a lot of shows, but, you know, the trajectory of my career hasn’t exactly been linear. I’m pretty blessed. I mean, I might live in London for a month to work a single, so …

LEO: Are you happy with the response to the album?

KS: Of course! It’s been overwhelmingly positive. I feel really happy; people have been so accepting. You never know how people are going to react when you put something out. I want to say like 95 percent of everything has been really positive. It’s always nice to get recognition for what you’ve done.

LEO: Any thoughts about your next album?

KS: Oh my god, no. I mean, I’ve been getting beats from people, but we haven’t really started talking about the next album. But we will.