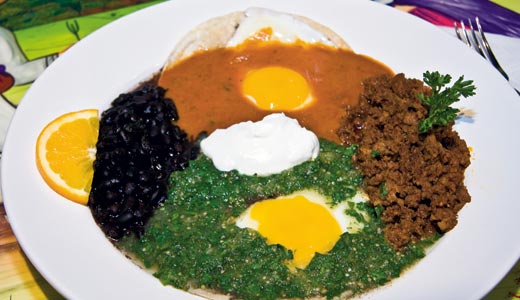 “Tell me what you eat,” the 19th century French gastronome Jean Anthelme Brillat-Savarin famously said, and “I will tell you what you are.”

Here’s a twist: Tell me how you breakfast, and I’ll tell you how you feel about getting up in the morning.

We English speakers “break our fast,” using punchy old Anglo-Saxon monosyllables to describe our custom of grabbing an early bite after a hungry night. Germans gutturally gripe about the hour as they enjoy their frühstück (“early bit”).

Italians are uncharacteristically businesslike about their early meal: “Colazione” stems from the Latin word that gives us “collation,” the act of putting pages in order or getting the new day in order with a simple meal.

Those languid French apparently dislike getting up so much that their “dejeuner” (“dis-fast”) has slid back from morning to midday, requiring the invention of “petit dejeuner” (“little lunch”) to signify their light, continental-style morning bite. And in Spanish-speaking countries, “desayuno” means “dis-fast,” too, but it sounds so musical that it makes you want to wake up and grab a bite.

Hungry yet? How about a little desayuno? Barring the Saturday bowl of menudo at the local taqueria, the regrettable closing of Bueños Dias Café in Jeffersonville left the area bereft of a really good Mexican breakfast … until the happy arrival of Zapata’s Corner in Middletown, refilling the space left vacant by the brief final incarnation of Mazzoni’s with a happy, colorful Latino vibe.

Zapata’s is a full-service Mexican restaurant that’s fully accessible to Anglos, with an English menu and fluent English-speaking servers. Its fare and its style fall in the same genre as Los Aztecas, El Nopal and other similar local Mexican eateries. But Zapata’s serves a full Mexican breakfast menu all day on Saturdays and Sundays, offering the early riser and the slugabed alike a tasty opportunity to break their fast in Latin style.

If you haven’t been to Zapata’s yet, you’re in for a colorful treat that entertains the eyes as well as the palate. The scene is almost psychedelic, with overtones of a Mexican folk art museum. Mexican village scenes, smiling sun faces and Technicolor parrots adorn the tabletops, the backs of booths and chairs in bright primary colors.

The original open space has been divided into smaller rooms for a more intimate setting. Simple flatware comes wrapped in paper napkins, but heavy glass tumblers for water and iced tea are high style.

We arrived at midday on a Sunday, ready for a fashionably late breakfast, er, desayuno. The traditional menudo is missing from the menu, and there’s no hot sauce on the tables, calling Zapata’s claim to be “the most authentic Mexican restaurant in the Louisville area” into question. Frankly, any Spanish-speaking taqueria will surpass Zapata’s in authenticity. But it’s good stuff, quality Mexican fare made easy for gringos.

More than a dozen breakfast choices are modestly priced from $5.99 (for many dishes, including huevos rancheros with red or green salsa and dos sombreros, two eggs over easy on toasted bread with salsa) to $7.99 (for molletes potoncinos, Mexican bread spread with beans, beef fajitas and cheese).

Demonstrating that no tall walls or vigilantes deter food concepts from passing freely across the border, the menu offers a few classic Mexican breakfast dishes along with a number of morning options that could well be gringo but for the addition of rice and beans and a touch of Mexican spice.

A ham and cheese omelet ($6.50), for instance, gains a Mexican accent mainly from side dishes of Mexican rice and beans. Ditto bistek con huevos (grilled rib-eye steak and eggs, $6.50), not to mention tia de milanese, which could be called pollo-fried steak, as well as old-fashioned pancakes, topped with half of a peach.

More Mexican in flavor are chilaquiles Zapatas ($6.50, eggs scrambled or over easy with strips of tortilla and red or green salsa); Milpas ($6.99), an omelet with mushrooms, onions and cheese); and our breakfast picks, detailed below.

Molletes ($6.99) makes a hearty breakfast indeed: Thick-sliced Mexican bread (it looked a lot like Texas toast with sesame seeds sprinkled on the soft brown crust) was spread with creamy frijoles, with spicy beef fajitas poured on top and a slice of melted white Mexican cheese for a blanket. Dare we call it “Mexican SOS”? It was garnished with lettuce and a quarter-slice of wan, pale pink winter tomato, about the only thing in the house that wasn’t brightly colored.

I learned to love huevos con chorizos ($5.99) working with community organizers on the Latino West Side of Chicago, and it’s still a favorite. Zapata’s version is right on, a generous portion of scrambled eggs cooked with spicy crumbled chorizo sausage. It came with a tasty, soup-like ration of frijoles topped with shredded queso; a turban-mold of light-red rice studded with peas; lettuce, and slices of orange and winter tomato. Five warm, fresh corn tortillas came in a basket with a sombrero-shaped lid.

With strong, fresh iced tea (which was apparently included in the breakfast price), a filling Mexican morning meal came to an estimable $15.19, and courteous and attentive service earned a $5 tip.

When I heard that Chef Edward Lee of 610 Magnolia was behind a new fast-food noodle shop that opened last autumn in the midst of the club zone on Baxter, I was excited. I’ve got a lot of respect for Lee and his work, and 610 has been one of my favorite Louisville restaurants for 25 years, under Lee and his predecessor, Ed Garber.

After a couple visits to Potstickers, though, I’m puzzled and bemused. If Lee is really behind it — and I have no reason to doubt that — it’s got to be a hands-off operation.

They’ve done a great job of repurposing a tiny Baxter Avenue storefront as a fast-food noodle shop with an artful Asian sensibility. The concept — something like an Asian spin on Quizno’s or Moe’s — is inventive. The ingredients are quality, counter workers are friendly and helpful, and pricing is more than fair, with most meals in the $5 range.

But the food? Alas, Potstickers presents an unexpected culinary equation in which the whole is less than the sum of its parts.

A ginger soy pork noodle bowl ($5.45) was bountiful but sloppy, and the flavors spoke mostly of salt, with hints of ginger and spicy heat.

The namesake potstickers ($4.15 for eight) were even more disappointing. Pre-made, small and flat, they were reheated in something that looked like a toaster oven and sent aloft a cloud of smoke and a burning smell. Drowned in a mix of heavy sauces, they were crunchy, scorched and indeterminate in flavor.

Presentation was lovely, and the price was right: $10.18 for two plus $2.50 for the tip jar. But despite its lofty heritage, Potstickers, I’m sorry to say, needs work. If you go, I suggest sticking with noodles, with firm instructions to go light on the sauce.