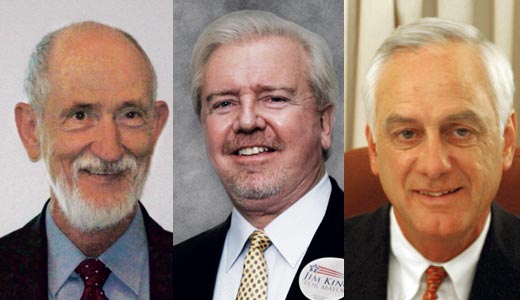 Metro Councilman Tom Owen, D-8, believes the next council president needs to take a more active role in city government given the circumstances:

For one thing, Mayor Jerry Abramson will inevitably be distracted in his last year in office while campaigning throughout the state as Gov. Steve Beshear’s running mate. In addition, the administration has already seen the departure of officials in key city agencies.

“One of the reasons I’ve asked to be president is because one of my fears is that indeed the council could be played as a platform and stage for mayoral candidacies,” says Owen, adding that half of the 26-member council seats are up for election as well.

The Democratic caucus recently endorsed the University of Louisville archivist, who represents the Highlands.

The pledge almost guarantees he’ll be elected to the post given their 16-member majority’s lock on the presidency for the past three years. Owen has already consulted with the Jefferson County Attorney’s Office about the legal parameters of what the council president can actually do beyond traditional committee appointments.

Legislatively, it’s difficult to forecast what issues the council will tackle this year. Of course the city will face continued financial difficulties that could result in further cost-cutting measures, but city officials hope recovery from the recession will begin this spring.

Among the more controversial measures that could end up on the council floor is the trans-fat ordinance, championed by Councilman Dan Johnson, D-21, who argues the artificial substance should be banned from all local eateries.

“Once I studied it, I learned that it’s probably the worst thing that there is for you to eat,” Johnson told LEO Weekly in October. “I mean, it’s off the charts what it does to you versus cigarette smoke.”

After eight months of study and public meetings, the Louisville Metro Board of Health is expected to present a recommendation to the mayor and council this month regarding whether to impose a ban. City health officials are weighing three options: launching a public education campaign about the dangers of trans-fats, instituting a voluntary program for restaurants as well as an education campaign, or banning trans-fats from eateries altogether.

Council Republicans and business owners have already criticized the possibility of a ban, arguing it will hurt small businesses and that Metro government shouldn’t regulate the diets of citizens. Such arguments were not enough to stop lawmakers from passing a smoking ban in bars and restaurants in 2007, but council members may be fatigued with instituting more citywide prohibitions.

There’s also a major debate looming over two different ethics ordinances. Both parties believe reform will happen this year, although they still disagree about how far proposed ethics laws should reach.

A handful of lesser-known city bills might also make it to the floor for debate in 2010. For instance, food justice organizations have been pressing for an ordinance that would require city agencies that serve food to use between 10 and 20 percent Kentucky-grown produce.

Because it’s an election year, Owen says whatever bills surface will likely have to have community support, as well as broad backing from the council.

“Most of the time people who are up for re-election don’t look for house-dividing issues to champion,” he says.

Republicans are confident their agenda will merit some long-overdue debate this year because Abramson is on his way out and because three of their council colleagues are running for mayor.

They saw signs of that when Councilman King, a Democratic mayoral candidate, recently announced that if elected he would restore the Louisville Metro Police Department gang unit, revitalize the street crimes unit, and earmark additional funding for the existing narcotics unit.

The King campaign tried to strike a cord with voters on crime by promising to reverse many of the changes initiated by Chief Robert White. The council GOP points out that they were questioning Metro Police officials and the mayor’s office about gang activity three years ago. The minority caucus looks forward to any debate about public safety and the King campaign may have provided the necessary spark for that discussion.

“(The mayoral campaign) adds focus to some of those issues that are most important to the Republican caucus,” says Councilman Kevin Kramer, R-11.

The council GOP believes the race will forward their agenda in many places as well, particularly around ethics reform, which they consider a bedrock issue.

Metro Council members running for mayor will have to learn to keep up with legislating while campaigning, a balancing act Councilman Kelly Downard, R-16, learned while making an unsuccessful mayoral bid against Abramson in 2006.

Though the candidates on the council say the current race will be cordial, the east Louisville Republican remembers it being difficult to get things done, even though he had a platform. Downard fully expects the current mayoral campaign will impact the candidates and the whole council.

“When I ran it became very politicized because, quite frankly, people voted down a lot of things I did. I learned that year not to propose anything. It was an automatic ‘no,’” says Downard, adding that the votes and activity of the candidates will give voters an opportunity to differentiate them while pushing untapped agendas.

“Fortunately,” he says, “I’m not a candidate this year.”