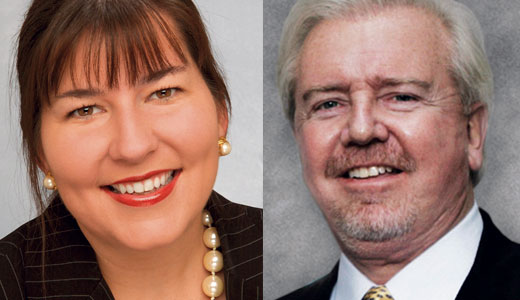 With an already crowded Democratic primary field, Louisville businesswoman Shannon White’s entry into the mayoral race was unexpected, to say the least. The former president of the Young Professionals Association of Louisville says she was encouraged to run for months, and she admits it was a tough decision to make. Now she’ll have to make up for lost time when it comes to fundraising.

After White announced her candidacy last week, some members of the media quickly zeroed in on the fact that she is a mother, asking whether parenting will get in the way of politicking (or vice versa). During an interview with 84 WHAS radio host Francene Cucinello, the outspoken media personality asked White if she has time to run a campaign considering she’s a mother of three young boys.

At a press conference just a few hours later, White was once again asked whether her family obligations would get in the way. This time, it was a local TV news cameraman who posed the irresponsible question. She politely pointed out that many of the male candidates have children as well. Take, for example, Councilman David Tandy, D-4, who has three children who are far younger than her sons.

“I wasn’t offended by the question. I think it comes with the territory of being a female candidate,” says White. “I think that most people think this is still a role for men only. I was surprised it was one of the top three questions that I got and continue to get.”

In 2009, Kentucky ranked 45th in the nation for the number of women holding office in the state legislature, according to the Center for American Women in Politics. Councilwoman Tina Ward-Pugh, D-9, says such questions are one of the reasons the number of female elected officials and candidates remains low.

“I guess there will always be Neanderthals among us who have yet to embrace what gifts and abilities people bring to the table, which has nothing to do with their gender or whether they have families,” says Ward-Pugh, who is supporting Democrat Tyler Allen for mayor.

“We’re about to enter in the second decade of the 21st Century and people are still saying to women, ‘Well, you’ve got kids at home.’ Where have they been? I just want to say, evolve people.”

Council Democrats hired Elizabeth Kinney Hoffman, a former Metro government employee, as their new caucus director last week. The 20-year city employee was an assistant director in the city’s Department of Neighborhoods until she was laid off as part of the mayor’s budget cuts. She’s now in a $65,000-a-year gig to help run the diverse 16-member caucus that involves developing strategy and policy.

In recent years, Democrats have had a difficult time keeping anyone in the position.

Since Metro government was formed in 2003, Democrats have had three different caucus directors, while Republicans have kept the same since merger. The revolving door has been spun as the price of a consistently large majority.

The Democrats have a healthy majority on the council, but they’re a dysfunctional family when it comes to coordinating an agenda. Last year, it was not unusual for a caucus member to draft an ordinance or resolution without keeping their partisan staff in the loop. They spent most of last year bickering over their caucus director’s job performance.

Meanwhile, their GOP colleagues often coordinate their positions, legislation and press interviews through their caucus director.

It was a complaint council Democrats voiced several times during recent interviews with potential caucus director candidates. Interestingly, the majority caucus passed on hiring communications director Tony Hyatt as caucus director, even though he advocated merging the two jobs, which is how the GOP operates. It will be interesting to see if Hoffman’s hiring changes the dynamic for council Democrats, but wagers inside City Hall say the caucus will continue to primarily work through their legislative aides.

Councilman Jim King, D-10, just can’t catch a break in his race for mayor. In December, the candidate hoped to spark a debate about public safety and unveiled a number of crime-fighting policy initiatives, but Louisville Metro Police Chief Robert White quickly rebuked those ideas.

Over the holidays, the CEO of King Southern Bank tried to show voters his gentler side by encouraging supporters and contributors to suspend campaign activity to help the less fortunate. Instead, news of that message was buried under a stinging editorial in The Courier-Journal calling for King to drop out of the race altogether.

“There are some people who, no matter what Councilman King does, will put a negative spin on it,” says King campaign manager Jonathan Hurst, who worked as the state director for Hillary Clinton’s presidential campaign in 2008. “Generally, people have been very supportive and positive. We’re the only campaign talking about issues right now. And I think any time you’re the frontrunner people will try to drag you down.”

Lately the King campaign has trumpeted that they were the first to raise over $1 million, but that’s only because of his personal fortune. The former Metro Council president gave his campaign a hefty $760,000 personal loan, which he claims is a sign of his commitment to the race. The fourth quarter report shows the campaign only raised $30,000 from outside contributors, however, and opponents say that could be a sign that King’s negatives are catching up to him.

Hurst readily admits the campaign made some early missteps, but he says the campaign hasn’t focused on fundraising as of late and has instead had an aggressive schedule discussing the issues with voters. The campaign is expected to unveil a series of radio ads around the Martin Luther King Jr. holiday and will continue to bring up crime, poverty and making the city more environmentally friendly over the next month.