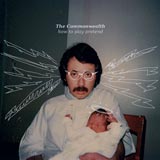 The surface analysis is that Daniel Duncan fills his sandbox with something illicit. Determined to renew intelligence as a tenet of modern pop, The Commonwealth’s ringleader makes bold, sweeping arrangements a rule. There is no sonic cave he won’t crawl into, no rhythm that isn’t fair game, and manipulation and composition are synonymous. Pressure to differentiate oneself can lead to forced results, but the good news is Duncan never lets the arrangements interfere with tight melody. He’s said he plans more EPs in the coming year, and if How to Play Pretend is indicative of what’s to come, I won’t hesitate to, as Hunter Thompson once said, “Buy the ticket, take the ride.”