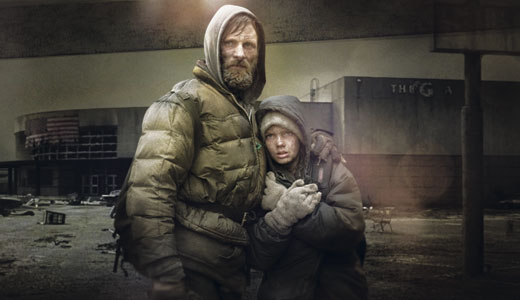 So, Jack Nicholson, forgetting about the Laker Girls for just a moment, puffs up his chest and bellows: “YOU CAN’T HANDLE THE TRUTH.”

Uh … wrong movie. But that oh-so-clichéd tagline could just as aptly describe “The Road.”

The story, based on the 2006 Pulitzer Prize-winning novel by Cormac McCarthy, revolves around some truly difficult truths. It’s not happy stuff here. The world is slowly dying, and a man is trying to keep his 11-year-old son alive as they make their way to an unnamed coast where it’s presumably warmer. Maybe some plants and animals still exist there. No guarantees.

The eponymous road that will take them there — a series of blackened and debris-strewn backroads and byways — is a seriously dangerous place frequented by marauding bands of cannibals.

The father has a pistol with two bullets, enough to do themselves in if it comes to that. They eat what they can scavenge. The man has convinced the boy they’re the good guys, “with the fire inside.” So when the man needs to make hard-ass choices about how to treat other people they encounter, the boy feeds the man’s own words back to him. Even in a dying world, youthful sincerity and empathy persist.

It’s a popular time for post-apocalyptic movies lately, though in Hollywood that typically means Denzel Washington or John Cusack with pyrotechnics, a love story on the side and a tidy ending. It usually doesn’t get this real, because that cuts too close.

Though McCarthy’s book was widely praised and made Oprah’s list, I was surprised anyone would see a film in it. Then it sat on the shelf for nearly a year; releasing such a flick during a recession probably makes no sense. It finally opened in limited release after Thanksgiving and made it to Louisville last weekend. (It’s done about $7.5 million through last weekend, according to BoxOfficeMojo.com.) Surprisingly, the theater was full for an early Friday evening showing.

Reviews have been tepid, usually along the lines of, “The panoramas are visually striking, and Viggo Mortensen and the little boy give believable performances, but why bother? What is the point?”

That, I understand. This isn’t recommended for global-warming skeptics or those who generally believe tales of man’s inhumanity to man always lack redeeming value. Get past that — if you see nuance and can put yourself in the position to wrestle with such profound existential questions — there’s some payoff here.

What would you do? How do you define your own will to live, particularly when there’s no reason to believe the effort will matter in the end anyway? Is it an ethical, heroic act to push a child into such a future — or blasphemy?

It’s a good piece of filmmaking, and the story is certainly a cautionary tale. At the least, it reminds you of the many things we take for granted. And that’s something. You’ll know intuitively if you care to handle that kind of truth.