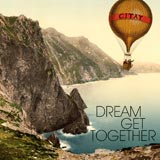 Citay is one of those bands that pops up on the scene so rarely, music geeks often forget they even exist; a band that can take an overused trend in music and somehow breathe new life into it. With their third album, Citay has made the record that the Arcade Fire is still trying to make. Controlled chaos and erratic arrangements are everywhere, but Citay does it without the disingenuousness of supposed “indie-pop classics” as Neon Bible.

Dream Get Together lets the guitars soar and explore musical landscapes for a change, instead of resigning them to rhythmical accompaniment, leaving the violins and synthesizers to do all the fun stuff. That’s not to say such instruments can’t be found here — as on the seven-minute “Hunter,” a song truly breathtaking in its scope and intensity. This sounds spacey and lush, only Citay realizes that, by reeling in the strangeness, they let the weirdness out.