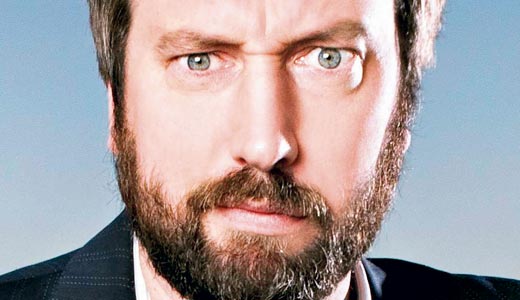 On the phone, Tom Green is even-keeled and careful with his words — polar opposite to the persona he’s honed on MTV’s “The Tom Green Show” and in films like “Road Trip” and “Freddy Got Fingered.” Lately, Green has been the host of an Internet talk show titled “Tom Green’s House Tonight.” On Wednesday, he will bring The TomGreen.com World Stand-up Comedy Tour to Improv Louisville for a one-night-only special engagement.

LEO: Who are your major comedy influences?

Tom Green: It would be the same names that most stand-up comedians would say … I love to go back and look at Richard Pryor and George Carlin and all the great stand-ups. And I’ve always been a big fan of talk television, that’s the other thing. I’ve collected a lot of video of people like Jack Paar and old-school ’60s guys like Tom Snyder, Dick Cavett and, obviously, Johnny Carson … and Steve Allen.

LEO: Your Internet show has been hugely successful and is shot out of your actual house. Where did that idea come from?

TG: I’ve always had a website, and I’ve always been doing things on the web since 1996 or something like that. It’s always something I’ve been goofing with. But as soon as you were able to put video up on YouTube and that stuff, I’ve been video blogging and things like that. I guess I’m just a video nerd.

LEO: With NBC’s shake-up of the late-night lineup, do you think the Internet can revolutionize talk shows?

TG: I think everything is going to change dramatically in the next five years. And I personally am trying to champion this idea that (anyone) can be an independent eye in the media. The thing people don’t realize about TV is that it’s so controlled. And that kind of bothers me a little bit. It would be nice if there was a place where you could actually watch someone’s artistic point of view, as opposed to some committee sitting around deciding what they’re going to show you. In a broadcast sense, and in a comedy sense, everything is so micro-analyzed before it gets on the air. And it bothers me. I think that’s what’s cool about the Internet — the creative freedom. It’s exciting times, man — it’s gonna be pretty cool to see what happens with this whole crazy Internet thing.

LEO: It seems your tour is pretty groundbreaking, combining your Internet show with a live stage show.

TG: Yeah, I wanted to see if there was a way to link them together. I thought it would be cool to blend those two ideas — of going on the road, working as a stand-up comedian, and then also having a little talk show. I’m going to mold my (Internet) channel a little more this year and make it more about what’s going on with the tour.

LEO: Most people don’t know you as a stand-up comic. How new is it to you?

TG: It’s actually kind of a new thing. This is my very first stand-up comedy tour. Basically, I’ve always had a television show — and particularly the last 15 years we’ve had a studio audience. (The two are) very similar in a lot of ways. It’s about reading the energy of an audience. I believe that’s the real trick to doing stand-up, and that’s not something totally new to me.

LEO: Why did you wait so long between making “Freddy Got Fingered” and “Prankstar”?

TG: It’s just the way things have gone and what I’ve been focusing on and doing other things. And also, people weren’t running up to me saying, “Here’s $18 million … do you wanna make ‘Freddy Got Fingered 2’?” Ya’ know what I mean?

LEO: This may seem outdated, but did your bout with cancer affect your approach to comedy?

TG: I would say it changed my perspective on life. When that happens, it’s absolutely going to affect everything you do — comedy or anything else. So yeah … absolutely yeah. And I think in some ways it’s actually been a good thing to have that perspective. I feel like I have a more profound appreciation for the fact that you only have a limited amount of days on this planet, and you might as well make every moment as positive as you can … because who knows? Who knows what’s going to happen?

It’s been an interesting ride, moving to L.A. and getting sick like that and everything else that happens with life. But at the end of the day, I think this is pretty awesome right now.