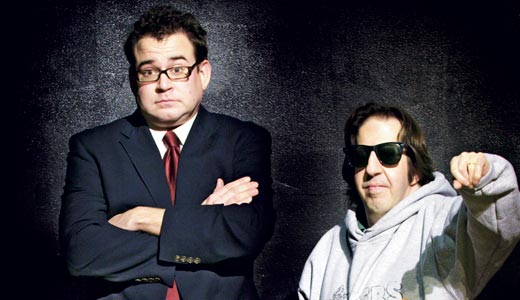 Believe it or not, the Louisville Improvisors are coming on 10 years together, and with Chris Anger, Alec Volz, Josh Lane and Java Man keyboardist Todd Hildreth at the helm, they’re still going strong. With their quirky, sometimes off-color blend improvisation, you can’t help but be reeled into every performance. Instantly you move from being a spectator to a vital part of the show. “We always tell people when we’re talking to the crowd, ‘Don’t try to be funny, interesting or clever — that’s our job,’” Anger says. “We don’t do this for ourselves, we do this for the audience, but we still know what we’re doing.”

“And really, the suggestion from the audience is only the starting point,” Volz adds. “We have to see where it goes from there.”

When it comes to the group’s decade together, Anger ponders it for a moment: “It’s nice to know that I can say anything, and my partner won’t let it die. We’ll always end up some place interesting and new.”

As well as being the 10th anniversary for the Louisville Improvisors, 2010 also marks the 10th year for Improvapalooza, an improvisational comedy festival conceived by Anger and Volz. “Our whole thing is that we always wanted to expand and explore the art form of improvisation,” Anger says. “That’s how Improvapalooza started, and fortunately for us, it has just gotten bigger and bigger.”

In recent years the festival has included acts like The Groundlings, the legendary Los Angeles-based improv troupe. Some of its members, including Stephanie Courtney from the Progressive Insurance commercials, also sat in with the Louisville boys. This weekend’s Improvapalooza features The Trans4merZ, a Santa Monica, Calif.-based troupe who adds a game element to the standard improv format. The group’s roster has included comedians Lisa Kudrow (“Friends”) and Cynthia Stevenson (“Happiness”) and guest performers Jon Lovitz and Conan O’Brien.

The Louisville Improvisors have always been dedicated to remaining true to the improv art form. And when it comes to their philosophy in regards to what they do on stage, Anger (the group’s appointed voice) says, “We don’t just play games, we’re also interested in character and development and teamwork — but the bottom line is just being funny. We start with a basic concept, but we don’t want to know too much, because if you’re doing your job right, you’ll figure it out.”

This winter, Anger and Volz plan to host a new round of improvisational classes at the Improvisors’ training site (627 S. Fourth St.). If you’re interested in the classes, go to www.louisvilleimprov.com.