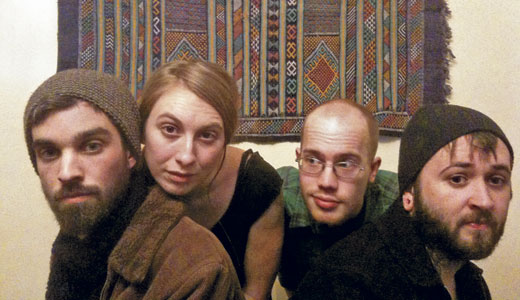 Greta Smith, ringleader of Egret, has bounced around from California to Austin to Phoenix to Louisville, a path she attributes to “Whims, in every instance. I think also I just didn’t want to live in Louisville, I really wasn’t happy when I was here. But I moved back here a year ago, and it’s been the best year of my life.”

She has a few travel dos and don’ts.

Dos:
• Travel with someone you like: “It seems obvious, but you would be surprised.”
• Be flexible.
• If you’re traveling in a car, take your tools with you.

Don’t:
• Go through Oklahoma.
• Be shy: “You’ve got to talk to everybody and see where it goes.”

A self-described late bloomer, Smith, 27, grew up in Bullitt County, where her mother’s family all sang during the holidays and her father played guitar. Neil Young was in heavy rotation on the home stereo, as was John Prine — “He’s the reason I ever felt like it was possible to write a song” — and Peter Gabriel. Smith wrote her first song in the back of a friend’s car while traveling through New Zealand in 2003, and says she forced herself to sing.

“I’m addicted now,” she says, writing at a good clip. “I put down whatever comes in my head and don’t really analyze the process too much.”

This weekend, Egret releases Bright Up There, which is part of a backlog of songs Smith wrote over the last two years. She enlisted guitar-lap steel player Paul Rushford, cellist Chet Gray and drummer Chris Martin, and holed up in Studio K with Trip Barriger last September.

Bright Up There is filled with Smith’s interpretations and themes of people, the outside world and relationships. “I’m a shameless eavesdropper,” she says. The disc opens with “Future,” a stark ballad with guitar that recalls wide-open living and re-conceptualizing relationships (Somewhere, out on 10 West … In the future, I won’t worry about you), and “Nightingale,” which mourns separations. In other songs, lush strings (“Pine and Yellow”) and playful gallops (“Butter”) take over.

Smith has the lead role in and will play the soundtrack to an upcoming independent film by local director Amy Seibert. Shooting in Louisville begins this summer. Copies of Bright Up There will sell for $5 at the show.