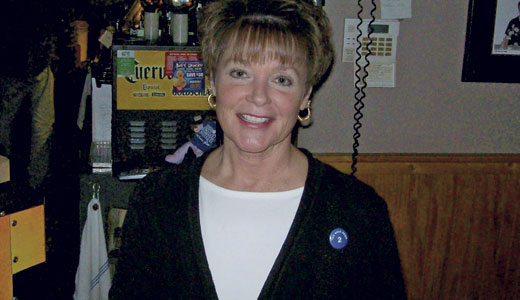 Twenty-five years ago, my worldview consisted of a utopian society where Strawberry Shortcake and Darth Vader strolled, hand in hand, along the Candy Land path. The smell of Light Bright pegs burning on a lightbulb filled the crisp, winter air. And my Barbies, who had a penchant for humping in Castle Grayskull, were my BFFs. Little did I know that a door to my grown-up utopian society, albeit through the back, was opening for the first time. In 1985, The Back Door Bar & Grille welcomed customers inside its tiny nook on Mid-City Mall’s north side. And ever since, it’s positioned itself among the best Louisville’s nightlife has to offer. It’s enchanting, quaint and magical — even when Marianne Schroeder isn’t pouring the drinks.

The Back Door has always been at the top of my list of favorite bars. It was one of the first watering holes I ventured into when I moved here 10 years ago. Some well-intentioned LEO coworkers kidnapped me on a late Thursday afternoon and demanded I become part of their “Last Supper” happy hour crew. I remember the sights, smells and friendly faces of that first visit, and to this day 5 p.m. can’t come soon enough on Thursdays.

So what is The Back Door’s secret? Is it the right number of pool tables? Stiff pours? Cheap prices? Dark and quiet corners to escape in?

“The secret is that we all are like family and we look out for each other,” says John Dant, the bar’s owner since 1987. “The employees care about their jobs. With all the turnover in our industry, it’s nice to know that customers are still thought of as people and friends — not just another person.”

“The secret is in the sauce!” bartender Marianne adds. “We try to make great drinks for great people. We must be doing something right, because we have some very loyal patrons who have been coming in daily for years.”

The family aspect at The Back Door is easy to detect. In fact, a handful of the bartenders have been there more than 20 years (including Marianne, Ron “Flash” Combs, Cindy Bowles and David Landenwich), which is rare in the service industry. I caught up with bartender Carrie Martin last week for a game of 10 Questions. She’s been slinging drinks since Day 1.

Bar Belle: Why are you still here?

Carrie Martin: It’s a fun job. I’ve always had job security whether the economy is good or bad. And there’s usually something that makes me laugh every night.

BB: What do you remember the most about the first year?

CM: Our joke was always: “What if you open a bar and nobody comes?” But we never had to worry about that. It was busy right from the start.

BB: How has the clientele changed?

CM: The daytime people are pretty much the same. Now, at 8 o’clock, it switches over and continues to get younger as the night goes on. The good thing is that it’s all still consistently bar and restaurant people.

BB: How has the bar changed?

BB: What do you love the most about working here?

CM: I like not having to get up in the morning, not having to fight rush hour ever. It’s like a family here, though. And that’s what I like the best.

CM: Idiots. People who drink too much. People who don’t know their limits. Fights, although they don’t happen often here. But when they do, it’s usually over something stupid, like a girl or a pool game.

CM: Tiny Tim came in on Derby Eve one year with this cab driver who was a regular and told him about the place. We’ve got pictures of him … he stayed a long time.

CM: Any well drink — it’s nice and easy. But people are pretty nice when they’re ordering shots and complicated stuff — they usually apologize. It’s the people behind them in line that they need to apologize to, not us. I don’t mind takin’ the time, that’s what I’m here for.

CM: Probably anything that’s a little foggy in my memory, like Mai Thais and Slings and drinks that you’d expect 80-year-olds to order. You get some kid who heard of it and doesn’t know if you’re making it right or not. Our line is, “Shake it and make it red.”

BB: What do you see in The Back Door’s future?

CM: Because we’ve always just relied on word-of-mouth, I see it continuing to be in existence and moving on … with or without me, I’m sure. I still can’t believe I’ve been here 25 years. I always say, “It seems like yesterday …” — it certainly doesn’t seem like 25 years. Other than the fact that my friends’ kids are now coming in. It’s kinda scary.

The Back Door is located at 1250 Bardstown Road. It’s celebrating its 25th birthday all this week, including a special party on Thursday from 6-9 p.m. with drink specials and appetizers. (Marianne, please save my seat!) Send your favorite Back Door memories to [email protected].

• “Is that Snookie? Or is she just wearin a bumpit?”

• “Why do we start each new year by dropping the ball? Isnt that a bad omen??”

• “Who is my girlfriend kissing?”

• “How about a penile implant in the parking lot?”