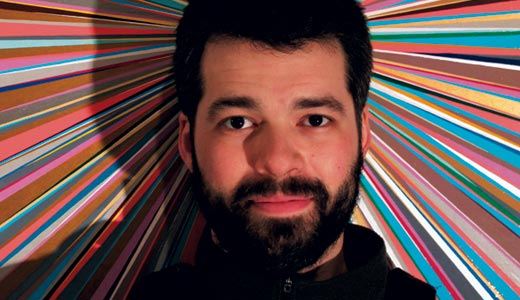 The inspiration for Gibbs Rounsavall’s “Unearth the Divine” exhibit at the Green Building Gallery lies 600 feet underground and thousands of miles away from the two buildings in downtown Louisville where his work, inspired by the Large Hadron Collider on the Franco-Swiss border, is displayed.

The exhibit is set up like the Julia Child kitchen at the Smithsonian; it’s a public reproduction of a private creation space. The wall-sized painting on the facing wall, the only one in the space, is an explosion of crisp, pure color. The worktable beside the canvas is crowded with paints and brushes, and there is a heaping pile of discarded painters tape on the floor. At first glance, you get the impression the artist may have stepped outside the studio for a moment. Confused as to why the radio was on when I entered the space, I called out the artist’s name in the empty room. One happens upon this busy space where all the elements needed for creation are collected in the same way the Collider endeavors to gather the forces from which our universe emerged.

The newer works are displayed next door to the Green Building, in the rough, gutted belly of 720 W. Market St. The space initially appears to be just another innocuous, undeveloped downtown façade, but its interior holds the vast majority of Rounsavall’s new works. Where the Green Building Gallery is bright and cozy, the 720 display space is just the opposite — cold, cavernous and dilapidated. The contrast serves to heighten the distinction between Rounsavall’s older, more exuberant works and his new dour studies in black and white.

His typical canvases are quite large, one triptych reaching 9 feet by 12 feet, (the size of my boarding school dorm room). Yet the new paintings seem reasonably proportioned in this humungous room, where they float against the gray, shagging walls. The paintings, which are black-and-white enamel paint on board, are a stark contrast to his previous works, which up until this most recent series have been graphic, abstract, optical art paintings — colorful, confident Appolonian studies in visual harmonics. The majority of the paintings in “Unearth the Divine” are a departure from their predecessors. Emerging from the slick black surfaces are various degrees of exposure of the surface beneath the paint, like the white capping of waves. Rounsavall’s white struggles to emerge; organic shapes shimmer in various depths like a school of shooting stars in a tank of deep, dark water.

It would be tempting to deduce that Rounsavall has committed some kind of easy, formulaic inversion of his previous work; where there was light, now will be darkness. Where previously there was strict geometry, now will be organic asymmetry. But beyond that perfunctory survey of obvious contrasts, what is exciting about this new work is the supposition that yielded it. Much like the Large Hadron Collider, Rounsavall is playing catalyst, primordial creator. Standing before an enormous dark triptych, like the surface of an inert earth, he manifests light through inspired subtraction. “This was something 180 degrees from the paintings I had been working on for the last year,” he says. “My calculated exploration of the LHC resulted in developing my own capacity for self-awareness in the moment where an impulse to make a specific kind of mark revealed itself.”

In this echo of creation, Rounsavall is exploring what it means to embody the primordial creative force. Just as Mark Tobey developed a super language to universally convey his experiences with the “divine” half a century ago, Rounsavall uses science and scientific discovery as his superscript to dissect the act of creation. He challenges us to trace our steps back and contemplate a universe where the sacred and the secular had yet to be bisected — where a collision of atoms would set into motion our universe and everything in it.