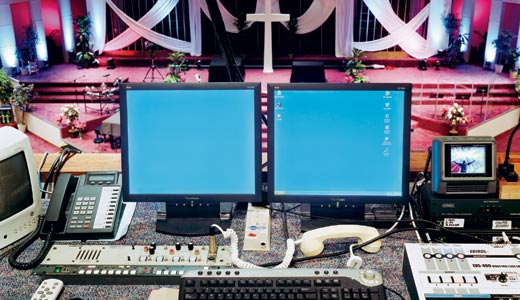 Louisville has its fair share of nicknames — River City, Falls City, Derby City, Aliville … the list goes on. But there’s one nickname that you might not be aware of: Due to the numerous and varied houses of worship within the city limits, Louisville was once known as the “City of Beautiful Churches” — reflective of our burg’s historical piousness, not to mention the fact that you can throw a rock anywhere downtown and hit a steeple.

So it’s somewhat fitting that the 930 Art Center’s latest exhibit reflects that religious tradition while at the same time subverting it with a secular flair.

The dual exhibit, which runs through Feb. 21, is comprised of Kansas-born artist Joe Johnson’s collection of photographs dubbed “Mega Churches,” which offers various scenes and architectures from modern-day America’s answer to the Gothic cathedral, as well as a series of aerial satellite photos of 11 mega churches by photographer Travis Shaffer.

When combined, the works showcase the bizarre effect technology and consumerism have had on the religious experience, particularly with the advent of the mega church — all without being too preachy or didactic.

“People will get out of this whatever they bring to it,” Johnson said during a lecture on the exhibit’s opening night. “There’s nothing new about spectacle in religion. What’s unique about the mega church is the merging of this spectacle with the actual religious practice.”

Johnson is right about that: During the opening reception, the responses of patrons that I overheard ranged wildly, from outright shock and disgust at a photo of an Indiana mega church depicting a bloody scene of torture from Christ’s passion, to simple recognition of Southeast Christian’s familiar, multi-sided Jumbotron.

The artist, who grew up as a Lutheran, got the idea for the show when he accompanied his mother to the “Hope Center” mega church in Raleigh, N.C., where the parking lot resembles a large commuter airport, according to Johnson. He was fascinated by what he saw inside the church and set about documenting it.

“With this work, I’m trying to say something about something that someone cares about,” said Johnson. “But (the exhibit) wouldn’t exist without them, so I wanted to be respectful and mindful of that.”

The “them” in this case would refer to the faithful, of which Johnson doesn’t exactly consider himself to be a part. This makes the fact that the venue is funded and moderated by Sojourn Community Church all the more interesting.

“A lot of people see Johnson’s work and automatically assume it’s critical of religion,” said Michael Winter, art director for the 930 Center. “There is a lot in (the show) that is a critique of the mega-church phenomenon. It’s interesting how churches grow and what they do with growth, which is something Sojourn is dealing with now.”

Since its founding a decade ago, Sojourn has grown and renovated their hub at 930 Mary St., transforming it into an excellent gallery and music space that, unlike its mega counterparts, doesn’t shun the secular world — especially when it comes to art.

“This isn’t a Christian venue, even though it’s run by a church,” Winter said. “We’re aware of the dominant Christian culture as portrayed in the media, and we were really upset by that dominant Christian subculture when we were just starting out. It is something we knew that we didn’t want to be, but we needed to figure out what it is we actually wanted to be. We’re still doing that. If anything, Johnson’s work gives us hints.”

Equally compelling is Travis Schaffer’s collection: stitched-together satellite images of America’s 11 grandest mega churches, their asphalt-laden arteries twisting out into the surrounding landscape like concrete tentacles. The massive scale of the photographs warps the context of the buildings’ intended functions, showing them not as houses of worship but giant, man-made lichens at odds with the natural environment.

Both exhibits reflect the tension inherent within these structures, whether it’s between people of varying degrees of faith, between corporate architecture and humble reverence, between the buildings and the world itself, or, simply, between American values and Judeo-Christian ones (which are less synonymous than you’d think).

In a nutshell, it’s the tension that thought-provoking art creates, and it’s now on display for the faithful and the heathen alike.