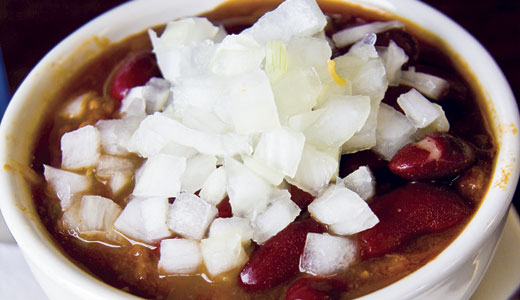 Tomatoes or no tomatoes? Beans or no beans? Chopped meat or ground meat? Chili powder, dried chilies or fresh? It’s like listening to medieval theologians arguing about how many angels can dance on the head of a pin.

A recent visit to The Chili Pot, a great new spot in Okolona, filled me with the warming potion and prompted me to ponder the chili mystique.

To purebred chili-heads, it’s a historic dish with a long tradition that goes back to the Texas-Mexico border country. Spread across the heartland by cowboys on the open range, it was — and should forever be — a pure, unsullied combination of beef and chili peppers, nothing more, without adulterants or fillers, no matter how delicious those additives might be.

Much of this mythology is promulgated by two major nonprofit groups in the United States that organize chili snobs, er, hobbyists in formal chili competitions leading to championship events whose proceeds go to charity: the Chili Appreciation Society International (CASI), whose contest is the famous Terlingua International Chili Championship every November in the west Texas town that gave the championship its name, and the International Chili Society (ICS), which wanders nomadically around the Chili Belt every year.

For most chili-heads, according to the ICS website, “The purest form of chili is traditional red, also called ‘Texas red.’” Competition cooks limit their vista to the perfect blend of finely chopped meat, spices, sauce and possibly a discreet selection of vegetable matter. Beans and “other fillers” may never be added. The CASI rulebook enumerates “beans, macaroni, rice and other similar ingredients” among the forbidden items.

OK, fine. I’m down with that. But having grown up in the Ohio Valley, a long way from the old Chisholm Trail, I have my own comfort-food memories of a form of chili that satisfies my taste buds just fine, even if it would get me ousted from Terlingua on a splintery rail.

I’m talking about Midwestern-style chili, a soupy concoction of beef and chili powder that adds such heretical no-nos as beans, tomatoes and even sometimes a greengrocer’s list of green peppers, carrots and all manner of other strange things. And, horror of horrors, it’s usually served dolloped over a mound of steaming spaghetti, optionally topped with rations of chopped raw sweet onions and grated mild yellow cheese. You can make it at home, or you can enjoy a delicious rendition at many of the city’s most iconic taverns. Check’s, anyone?

If you want to start a real argument, bring up that cinnamon-scented upriver variation, Cincinnati chili, which is essentially Midwestern chili melded with Greek spaghetti sauce, invented by Greek immigrants after World War II. (Truth be told, on the proper occasion, I won’t say no to a Skyline or Gold Star “five-way.”)

Which brings us around to The Chili Pot, a new eatery with plenty of chili on the menu, not all of which quite meets CASI or ICS standards, and frankly, my dear, I don’t give a damn, because it’s good stuff.

We settled in on a sunny but frigid day, perfect for chili, and found two large rooms painted bright, shiny white, with one dark gray and burgundy wall to break the monotony. Several large-screen televisions adorn one wall and line up behind a short beer bar at the back of the room, sharing wall space with historic photos of Okolona. Plenty of mahogany tables and black dinette chairs appear to seat close to 100, and service was quick and friendly.

Chili dominates the top of the menu, of course, but those with a hankering for other dishes will find a small but appealing list of alternatives: Nathan’s brand hot dogs, for example, are $2.09, served on either a plain or poppy seed bun with your choice of jalapeños, onions, relish, kraut, a tomato slice or pickle spear. Add cheese for 79 cents and pour on a dollop of chili for $1.29. Or bring your family and get a half-dozen dogs for a sharply discounted $7.99 total, chili and cheese extra.

A chicken salad sandwich on sourdough is $4.79 with chips or fries, and a grilled cheese sandwich like Mom or the Woolworth’s lunch counter used to make is $3.09. You’ll find plenty of sides including outstanding house-made fries ($1.59 for a medium order, $2.79 for large), and you can top them with cheese or even cheese and a ladle of your favorite chili (up to $2.59 extra on your large order of fries). Add a garden salad ($3.29) if you want something green with your meal other than relish; top it with grilled chicken for $1.80 more.

When I go to a place called The Chili Pot, though, I want to eat chili, and between us we sampled three of the four varieties available. Chili is made “medium in spicy heat,” the menu accurately claims; there’s Tabasco (plain or chipotle) and dried red-pepper flakes on the table if you want more spice.

Chili comes in your choice of five sizes, from small ($2.29 for a cup of the Louisville-style chili) to half-gallon ($33.99 for a bucket of the sirloin-steak model). A corn muffin or jalapeño muffin comes along free, as does your choice of onions, jalapeños, spaghetti or red beans. Cheddar or Monterey Jack cheese or sour cream are optional for a small upcharge.

Mary settled into a medium ($3.99) bowl of Louisville-style chili, a thick and warming mix of ground beef, tomatoes, onions and spices at about one-alarm heat. She took the spaghetti option, of course, as well as the red beans, and declared it was just like her mother used to make, only better.

I determined that a small order is about coffee-cup size, allowing me to nosh on two for a hearty lunch, and sampled one each of green pork chili (2.69) and sirloin steak chili ($3.29).

All three were fine, as was the simple comfort of the grilled cheese sandwich ($2 as an add-on to my chili). I’m confident the fourth chili option, white chicken chili ($2.69 for small), would have passed muster as well.

It’s a bit of a drive from my quarters to The Chili Pot, and I have to pass such Mexican favorites as Rosticeria Luna and La Tapatia to get there. Nevertheless, I’m thinking I might have to go back now and then. It’s that good. And it’s that affordable: Our hearty lunch, including tip, topped out around $20.