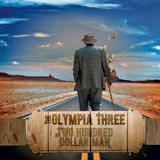 What appears to be Olympia Three’s final effort — the band is splitting up next month — shows the group evolving toward modern nu-grass and ending on a mixed result. Phillip Olympia’s stretched-out vocals are long on character yet feel detached from the rest of the hoedown going on in “Oh, The Humanity.” “Two Hundred Dollar Man” is capable mid-tempo, mandolin-focused twang. On “Twenty Words,” a contemporary country-meets-surf guitar figure leaves you stuck to the ceiling — if only Olympia would tear the lid off and cut loose, you might actually stick around for the party started by the 1:10 banjo jab “Zesty Zany.” Olympia Three’s final performance will be in February at Skull Alley.