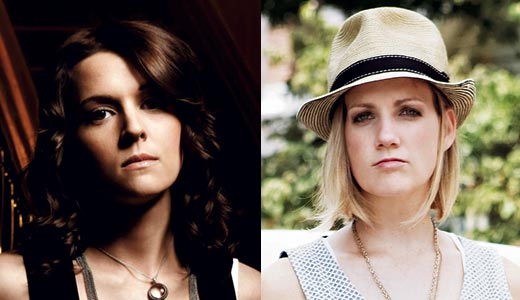 It’s easy to draw parallels between singer-songwriters Brandi Carlile and Katie Herzig — they both effortlessly tap into the ups and downs of the human experience and produce heartfelt songs that resonate. While Herzig’s voice lends itself to a more poppy kind of low, Carlile’s raw, gritty croon can bring you to your knees. Both are happy to return to Louisville on Friday. Carlile is promoting her third album Give Up the Ghost and fondly remembers the show she played last year with the Louisville Orchestra: “The symphony in Louisville was the best one on the tour. I still remember that show vividly.” And opener Herzig, who has made several stops at the Vernon Club to promote Apple Tree, is looking forward to playing the Brown. “We get pretty spoiled with venues on this tour,” she says. “But I will miss the bowling alley!”

BC: It constantly changes, because the newer songs obviously have a heavier impact. Right now it’s “Before It Breaks,” and before that it was “Cannonball.”

LEO: My favorite song off Give Up the Ghost is “Pride and Joy” — how did that come about?

BC: It was just a time when I was on the road, and a lot was going on. I was in a songwriting exercise where I realized that to make Give Up the Ghost, I would have to tap into (a) bigger place than my environment would allow. I would veer back into my past and puzzle it and pine about my future. I was musing about some of the harder parts of my childhood when I wrote “Pride and Joy,” and sort of confronting them as an adult.

LEO: When you write a song, do you come up with a lyric or theme first?

BC: It’s totally random and depends. Sometimes I’ll come up with a little piece of music and have to find some words to go with it. And other times I’ll have to say something so urgently that I’ll write a three-page dissertation or a poem or story and try to find a way to fit that into a song.

LEO: Which songs are easier to write — happy or sad?

BC: I really don’t know how to write happy songs. It’s really difficult for me, because I don’t have any creativity from that place.

LEO: What do you like the most about touring?

BC: I like the exchange of energy every night with the audience. And my crew becomes an instant family when we’re touring.

LEO: What would we be surprised to see in your rider?

BC: Smoked oysters and sardines. It’s something me and the twins really like, and we ended up putting that in our rider because my dad loves sardines and oysters, but they’re really expensive so he doesn’t buy them. At the end of the tour, we’ll show up with like 75 cans of oysters and sardines, and it’s like Christmas for him.

BC: Probably Taylor Swift. There’s something about her emergence into the world that people will overlook because she’s so popular right now. They will not realize that she is of a caliber of a child star that will grow into being a classic artist. They don’t realize she is the Carter Family, that she is the young version of these classic artists we love so much.

LEO: Who are you listening to at the moment?

BC: The Lilith Fair — it’s probably going to be one of the biggest experiences of my life, because it sculpted me into who I am. They asked me to be a part of it, and it’s one of the best moments in my career so far.

BC: It’s two-thousand-ten. The whole concept of 2012 is so annoying to me that I can’t call it twenty-ten.

KH: It would have to be “Wish You Well.”

LEO: That’s my favorite song off Apple Tree — how did it come about?

KH: It was a combination of stuff going on — I had some close friends’ parents pass away, and I had someone who was sick in my life. It all kind of manifested itself in that song.

LEO: When you write a song, do you come up with a lyric or theme first?

KH: I really don’t write lyrics first, so I’m usually working off of music and melody.

LEO: Which songs are easier to write — happy or sad?

LEO: What do you like the most about touring?

KH: The main thing is getting to play shows for people who have been listening to your stuff, and feeling more connected with what you’re doing. It brings all of that to life for me, I guess.

LEO: What would we be surprised to see in your rider?

KH: I don’t think this is a surprise, but the Greens Energy Bars — we’re all kind of addicted to these things.

KH: I think my biggest all-time guilty pleasure, which I don’t feel too guilty about, is Enya. It’s always been my go-to comfort music. Only in certain circles do I have to be embarrassed by that.

LEO: Who are you listening to at the moment?

KH: I’ve been touring pretty much non-stop for the last two and half years, so I’m going to write and record for my next record at home.