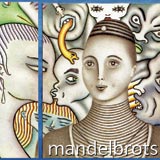 The Mandelbrots are named after an obscure mathematical theory, and their sound is equally complex. At first listen, You Are All Perceivers sounds like a fairly straightforward alt-country collection (with a focus on the country). But on second and third listens, the album begins to reveal itself. The drummer, Gabe Stone, is the secret weapon here; his subtle playing often drifts to the background, but when he’s unleashed, like on “Machines,” it becomes clear he’s the driver. Overall, the arrangements are fairly standard and flawlessly executed by technically proficient players. The lyrics are clever and thought provoking, dripping with self-analysis and the occasional bout of heartbreak. The main drawback is that the band finds mid-tempo and sticks with it — there’s little variation.