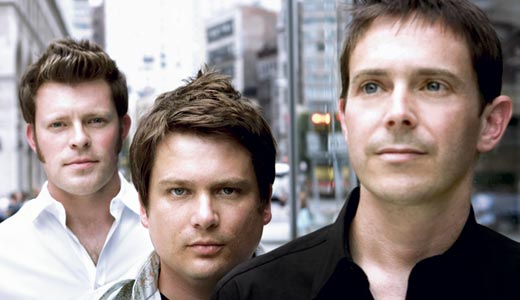 While the seeds for Glen Phillips’s new music enterprise might have been sown at Largo — Los Angeles’s spiritual home of music — the genesis of Works Progress Administration actually took place upon the stage of Santa Barbara’s The Lobero Theatre. Phillips had just returned from a sojourn through Europe, and his welcome home came in the form of an evening of music with friends. Joining Phillips on stage that night were Sean and Sara Watkins, Luke Bulla, Benmont Tench and Greg Liesz — Largo cohorts one and all.

The collective gelled immediately and threw forth a magical musical offering that still resides as one of the historic theater’s finest moments. Those in the audience were not the only ones to realize they were sharing in something special. The on-stage collective also quickly came to the same conclusion, and, when Pete Thomas and Davey Faragher subsequently joined the fold, the octet ventured into Jim Scott’s Los Angeles recording studio. Works Progress Administration recorded 17 songs in just five days, something that reflects the stature of the personnel involved.

Their collective talents encompass the likes of Toad The Wet Sprocket, Nickel Creek, Tom Petty and the Heartbreakers, Elvis Costello and the Attractions, and even Wilco. Phillips, Thomas and the Watkins siblings have also collaborated previously through Mutual Admiration Society. Given its pedigree, Works Progress Administration is a collective unlike any other. But, more importantly, it’s also the current point of focus of its constituents.

“We are all ambitious musically and would love it to do really well,” Phillips says. “And we will try to be savvy and careful as we want to put it out in a way that will work for everybody. Everybody feels a real sense of ownership. Even though some of the more seasoned cast members have been playing with these well-established and incredible bands for so long, I think it is exciting for them to be here and feel like they have a sense of ownership of this, too.”

That sense of ownership has seen the ensemble out on the road supporting the recent release of their self-titled album. Molded around the core constituents — Phillips, Watkins and Bulla — the band welcomes whomever else might be available on any given night. It is a musical advocacy that ensures the experience remains unique — something both the recorded and live incarnations testify to. Works Progress Administration tackles an eclectic collection of musical offerings, both borrowed and born. Given the strength and depth of the musicianship present, the songs fittingly reflect an equal standing.

“The songs come from everywhere,” Phillips says about the origins of band’s material. “I have some songs on there, and I have also co-written one song with Luke and another with Sean. Sean has a couple of songs, and Luke has a song of his. Sara has sung some covers, and also one of Benmont’s called ‘The Price,’ which is a great song from his Heartbreaker days. And maybe it is just because it’s new, but it’s a really exciting thing to be a part of.”