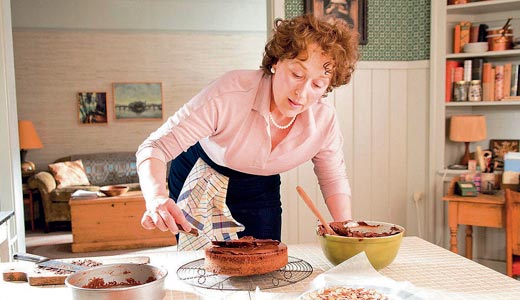 HARRY POTTER AND THE HALF-BLOOD PRINCE

Director David Yates pretty much throws away the book and does his own thing in this, the fifth of seven planned HP movies. A shame, too, because some of the best — and most evil — characters of the whole series were introduced in this one. Anyway, Daniel Radcliffe walks in a trench* and battles prostate problems while Emma Watson just gets better looking. Dumbledore bites the big one, and author J.K. Rowling buys England to be her summer home. Fun movie. (*Watch the train-station scene. Radcliffe is so much older and taller than the kids around him that he has to walk in a trench to be at the right height.)

Meryl Streep hams it up good, with Amy Adams spreading it on thick as the would-be writer who makes 524 French recipes in 365 days in order to understand her mentor’s zest for life. While based on a true story, this is pure Hollywood pablum with writer/director Nora Ephron showing off her remarkable storytelling skills. Your basic female-empowerment movie, but done with more style, charisma, eggs and butter than you’ll see in a baker’s dozen lesser films. Bon appetite!

AIRMEN AND THE HEADHUNTERS

Great PBS doc about a WWII bomber crew, shot down over the jungles of Borneo, crawling with savage headhunters and Japanese soldiers. They are taken in by the Dayaks, one of the most notorious tribes, and nursed back to health. The natives then join them in clandestine operations against the Japanese. A right-good story told by the sole surviving member who returns to the island to lovingly reconnect with his cannibal saviors. They eat him.

CLINT EASTWOOD PRESENTS: JOHNNY MERCER: THE DREAM’S ON ME

Never heard of Johnny Mercer? Ever hear “Moon River”? “Hooray for Hollywood”? “The Days of Wine and Roses”? Mercer was one of America’s greatest lyricists and a vastly underrated poet whose talent gave life to the music of Irving Berlin, Cole Porter and scores of others. This two-disc set features some of the greatest musicians of the 20th century who gather, recollect and pay homage to his genius in the best way imaginable: through his music. Recommended.

One of the best mysteries we’ve seen in a coon’s age. A German artist learns of the murder of her Taiwanese lover and rushes there to learn more. She is then approached by a mysterious young woman, claiming to be a journalist, who begins asking questions, and later tries to seduce her. Disoriented and frightened, the artist returns to Germany, but shortly afterward the journalist shows up on her doorstep amid a spate of odd, inexplicable events. Highly recommended.

A straight-to-vid Ben Stiller comedy. No, wait! Come back! Jason Schwartzman plays a grown man whose mind is stuck in high school where he was the star of the senior musical. Stiller is his old drama coach. Both have an epiphany while working on the latest play and lusting after the same teenage beauty, Anna Kendrick. Beennnnn therrrrre!

Fans of AC/DC — and who ain’t?! — will immediately recognize this as their now-infamous concert from Spain in the 1980s. “Infamous” because the crappy hand-held vidcams of the day made this unwatchable. Sony has done a good job at cleaning up the visuals and un-muddying the sound while up-converting everything to Blu-Ray. The results are still rough, but vastly improved — and it marks the return of Phil Rudd on drums!

Johnny Depp is brilliant, as always, as ruthless bank-robber John Dillinger, who became a folk-hero during the 1930s. Christian Bale is Melvin Purvis, the Fed charged with bringing him to justice, and Marion Cotillard is a cute bit of tail. She’s also in the movie. Directed with Michael Mann’s trademarked action and style, the script isn’t as good as the talent on the screen. A fun flick, nothing more.

Violent and disturbing ode to Tarantino and ’70s exploiters, courtesy of film savage Joseph Guzman. A pair of gorgeous Catholic schoolgirls are selling Bibles door-to-door to raise money for their school. Until, that is, they stumble upon a murder and are taken hostage, beaten, raped and defiled by a slimy drug dealer, his gang and their whores. But in classic retro style, one of the girls escapes and, dressed like a nurse, returns to wreak vengeance on the lot of them.

THE DOG WHO SAVED CHRISTMAS

Yes, this is just as warm, fuzzy and snugly as it sounds. Mario Lopez provides the voice of Zeus, a former police K9 who somehow ends up the family pet/guard dog to your basic suburban bubbleheads. He has trouble adjusting until a pair of burglars — including former Superman Dean Cain! — try to steal Christmas. Aaaaah.

Tim Daly — who never seems to be having fun — opens up a bit in this parapsychological indie. He inherits a haunted mansion and turns to medium Zoe “The New Uhuru” Saldana and Tom Arnold for help. Tom Arnold? He’s toast.

Written and directed by Bobcat Goldthwait, you know right up front that this is not your basic feel-good family flick. Robin Williams stars as a man trying to connect with his family with increasingly painful results. With Alexie Gilmore, Daryl Sabara and an ending you have to see to believe.