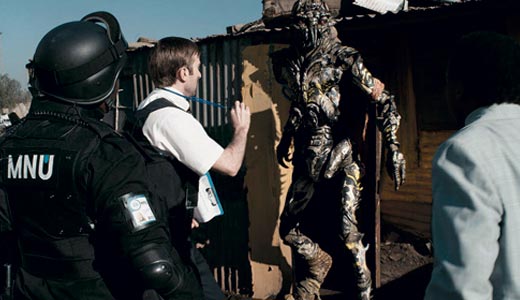 Zooey Deschanel and Joseph Gordon-Levitt are radiant in this sort-of throwback to the heady heyday of romantic cinema circa 1930 — but with a modern twist: He falls in love with her, but she doesn’t believe that love exists! An unpredictable roller-coaster ride of highs and lows, fun and sadness, discovery and discard, just like real life (only better written).

Peter Jackson bankrolled this wildly ambitious sci-fi allegory of segregation and racism, providing the services of his special-effects crew, but the show belongs to writer/director Neill Blomkamp, who dreamed up the seemingly lazy and stupid extraterrestrials who arrive on Earth but don’t even know how to get out of their own spaceship! They wind up in a slum, a literal hell-on-Earth of crime, filth, drugs and violence, shunned and rejected by their human neighbors. Sharlto Copley stars as the bureaucratic grunt assigned to move them to “better” quarters. Simply the best sci-fi movie in decades; our highest recommendation.

Sandra Bullock looks great but is ultimately scary as hell in this would-be comedy of a clingy, ditzy woman, completely obsessed with blind-date Bradley Cooper. She’s egged on by Cooper’s nasty boss, Thomas Haden Church, who’s the funniest thing in the film, with help by Howard Hesseman. Not your best choice for a date flick.

Eugene Levy is the only recognizable (and, we might add, rapidly decaying) face in this, the seventh in the pastry-pussy series. They ain’t getting any better, folks.

This fun little Limey import is about a 14-year-old girl who aches for Robbie, the new guy at school and “a gorgeous sex-god” who happens to be dating her blond and beautiful nemesis. Based on a book, part of a series of teen-romance comedies by Louise Rennison. Not terrific by any means, but it puts the fun back in young love; we liked it.

BEYOND A REASONABLE DOUBT

Director Peter Hyams’s simply unnecessary remake of the 1956 film noir classic with Jesse Metcalfe as the cub reporter who digs too deeply into the methods of scary DA Michael Douglas. With Amber Tamblyn and Orlando Jones. Ask for the original.

Stanley Tucci and Patricia Clarkson star in this indie romantic dramedy about a long-married couple who find themselves unable to relate after a family tragedy. That’s when they begin placing ads in personals columns, repeatedly meeting “for the first time” as different characters.

Mike Judge wrote and directed this less-than-great comedy that centers on Jason Bateman, a man who gets no respect from his cheating wife or lazy, dim-witted employees. Then one day he hires Mila Kunis, and — boing! — her infectiously randy happiness seems to be tempting him, but she, too, has an agenda that is not in his best interest. Has some good slapstick moments.

The sequel to that Family Guy “Star Wars” spoof called “Blue Harvest” (George Lucas’s secret working title for “Return of the Jedi,” used to keep over-rabid fans off the scent). If you liked the first one, you’ll like this one.

A fun distaff take on the “blind swordsman” legends with Haruka Ayase as the sightless lass who treks from town to town with her guitar and sword, dispensing love, song and savage steel-edged justice as needed. We enjoyed this.

True guitar heroes Jimmy Page, The Edge and Jack White join forces to express their individual and collective passions for the electric guitar in this excellent doc from Davis Guggenheim (“An Inconvenient Truth”). We could go on and on, but just trust us: This is one of the greatest experiences we’ve ever had watching a video. It will make you want to run out, buy a secondhand guitar and dedicate the rest of your life to playing it. As it should be.

A wicked country-music soundtrack livens this redneck family potboiler about Jimmy Wayne Collins (Brett Moses), who returns to his Texas home to deal with a dying father, a brother in prison, Dominique Swane and Lee Ann Womack. Silly, but entertaining.

Watch for deep discounts on this superb, 17-disc set of one of the best sitcoms ever created. A breakout hit from the then-unknown genius of James L. Brooks (“The Simpsons”), it launched the careers of Judd Hirsch, Danny DeVito, Marilu Henner, Tony Danza, Christopher Lloyd (whose stoner “Reverend Jim” character could make a grown man pee the couch), Andy Kaufman, Carol Kane, Rhea Perlman and many others. All 114 perfect episodes; a must-own!

THE VALLEY OF BEES/WITCHES’ HAMMER

A pair of Medieval tales from Czechoslovakia. “Hammer” is something of a Slavic “Witchfinder General,” about the persecution of harmless peasants by the church and village leaders who have their own greedy agendas. “Bees,” one of the very best movies we know, is about a young man, raised in a monastery due to his brutal father’s cruelty, who returns to the family castle as an adult and becomes engaged to his own stepmother. Incestuous storytelling at its finest.

Bio-drama of Evelyn Dick, a breathtakingly beautiful Canadian woman (played perfectly by Kathleen Robertson) who murdered her husband in 1946, leaving his torso to be found by children. Sentenced to hang, a slick-talking lawyer got her off, only to then be charged with the murder of her infant child, whose body was found in cement beneath her house. She was released from prison in 1958.

THE SECRET LIFE OF THE AMERICAN TEENAGER: SEASON 3