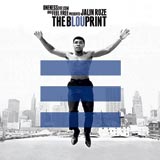 In contemporary hip-hop, one has to ask oneself: Which is more important, the emcee or the beat? What defines “good” in 2009? Take, for example, local emcee JaLin Roze and his latest project, The Blouprint. Of the disc’s eight tracks, seven borrow instrumentals from Jay-Z hits. The eighth borrows Jay’s 22-2s concept from his debut Reasonable Doubt. Considering that countless Internet rappers have pillaged and plundered Jay’s catalog to point of exhaustion, I wonder how it is possible that he didn’t eject (rather, move to Recycle Bin) Roze’s album by track two. Amazingly, Roze manages to not get buried by the easy familiarity of these tracks and the voice that is instantly recalled by the second bar. Although he doesn’t presume to better the tracks’ original owner, Roze shows a lot of promise, a strong vocal and a personality that goes beyond the clichés that most of these types of projects fall into. He’d better bring it for his proper, all-original debut.