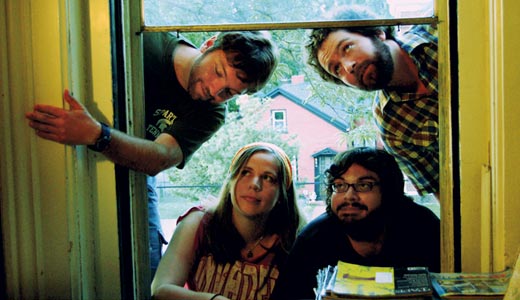 Second Story Man’s new album, Screaming Secrets, is a strange and beautiful beast. Equal parts punchy rock and harmonic sweetness, littered with violins, banjos and other interesting textures, it may be their breakout album. It took two years of intensive work to complete, and at their CD release show, they will re-create the album in its entirety. To do this, they will call on some friends so that every auxiliary instrument and part will be represented.

I squeezed into a comfy alcove at a local coffee shop to speak with Second Story Man (an appropriate place for a band that feels more like a family) about their new album.

LEO: The one consistent element I can find in your music is that every song feels like it goes through a process of being pulled in a different direction by a different individual personality over and over before it is finished. Does this reflect your songwriting process?
Carrie Neumayer: Every song starts out as one person’s vision. It’s like a skeleton. We take it, we bring it into practice, and then a number of things could happen. Evan might hear a melody that he wants to play with, or Jeremy will hear something, or we’ll add something entirely new that the song didn’t have before. Everything comes together when everyone contributes at practice.

LEO: How has the songwriting process changed in the 11 years you’ve been together?
Justin Davis: We take a lot more time for each song than we used to. We haven’t rushed anything. We’ve been really loose this time around.
Jeremy Irvin: I think we really dissect it. For me, I think I wanted this album to be cohesive. I think our last album (Red Glows Brighter) sounded like three different songwriters, and with this one, I think we wanted the songs to have a similar sound or feel.

LEO: What does the title Screaming Secrets tell us about this record?
JI: On this record there were a lot of subconscious things that really came together, that became clear once the record was done. I’m not going to come out and say exactly what that theme is, but …

LEO: I’m probably going to ask anyway.
JI: OK, I don’t mean that I don’t want to talk about it, but I want to leave it up to interpretation, because …
CN: You’ve got a good story about it, though.
JI: Well, a friend and I were out at a bar, and we were discussing some gossip that was going around, and the bar was so loud we were having to shout at each other, and we realized at some point how ironic it was that we were yelling out secrets, and someone said, “Screaming Secrets,” and we both stopped and said, “That’s it. That’s the name of the record.” It really does sum up the overall vibe of the record, because I think there are a lot of stories in there that are not very direct.

LEO: Huh? So you all are really aiming to un-define the “Louisville sound”?
JI: Yeah, that sounds exactly like how we work. We define our songs and then try to re-define every part. Like at practice, we take a song, completely tear it apart and then try and put it back together. That’s how I see it.
Evan Bailey: It’s very rare for a song to come out of practice sounding the way it did when it came in.

LEO: Do you have any band traditions or superstitions?
EB: Before we actually go on stage, we try to find a spot …
CN: Like the alley, or someone’s car …
EB: Or someone’s stairwell, where we can practice all the harmonies. Usually with an acoustic guitar.
JI: One time we got kicked out of some guy’s gym. This total meathead guy. Actually, we were in the hallway outside of this gym, and it was closed. He came out and said that we were scaring away customers, and we had to leave. But it was the only quiet place in the building we were playing. This practice warms up our voices and really gets us on the same page for the show.

LEO: Is there any importance to the band’s name?
JI: The dictionary definition is a burglar who goes in the back second floor entrance, because it isn’t as obvious. I think that’s something we have homed in on. We’re not going to take the easy way out. We are going to approach this from a different angle. Your typical person isn’t going to get it right away. You’ll have to dig deep to really get to the meat of it, to figure out what’s going on.