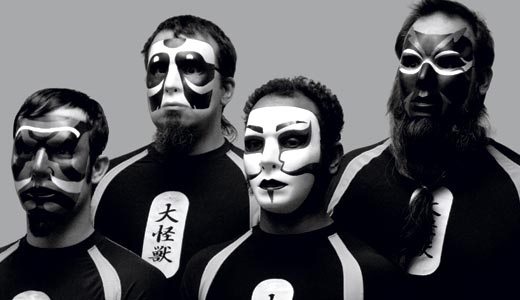 As a genre, surf rock fights a low ceiling. Sometime between 1951 and 1956 (histories vary), the first guitar chords rang out with spring reverb, a sound thought to emulate ocean waves, and tack-tack snare hits kept everything at a steady rhythm. Bands like Dick Dale and The Del-Tones didn’t deviate much from the formula.

LEO: How did the band form?
Daikaiju: Hyper-mutation from prolonged exposure to radioactive fallout and Falco.

LEO: Are you from Huntsville originally?
D: Daikaiju origin is the great international mystery of all time!

LEO: I’m assuming the make-up and name for the band are taken from the heroic monsters in daikaiju eiga films, no? How were you introduced to that culture?
D: The make-up of Daikaiju is masked men in four-heads form. Also, sometimes in five-heads form. Daikaiju name is reflecting the power of great mysterious beasts! Experimental cultures regularly injecting into Daikaiju to rapid growth and healthy smile.

LEO: What is there to do in Huntsville, Ala., besides look at the gigantic space rocket off I-65?
D: Huntsville is the great haven for regenerate body parts and slumber many days of great happiness.

LEO: I don’t hear a lot of bands referencing surf music these days. What led to that decision?
D: Springy sound of the reverb rocket manifests in typhoon force sonic boom to banish the great enemies.

LEO: In what ways do having alter egos benefit the band, both onstage and on record?
D: Daikaiju try to avoid the sickness of Beatlemania and Teen Beat.

LEO: The latest release I could find was from 2005. Anything in the works?
D: The new beautiful sonic vinyl’s in final stage for new year release — most confident to irradiate lovers of big monster noise — additionally, new stickers! But Daikaiju master project is focusing the energy for tighter abs and enlightenment with sexy new dance video for all ages!

LEO: What sort of reactions have you gotten from the stage show?
D: The world of people screams in ecstasy when drowning in the great pleasure waves of DaikaijuSound.