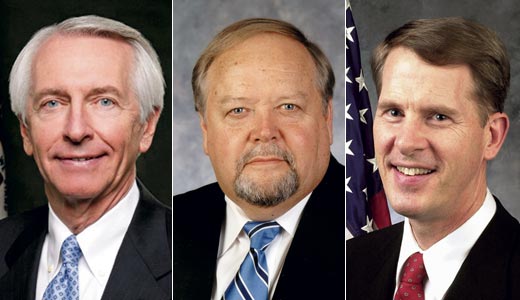 On Jan. 31, 1900, Democratic candidate William J. Goebel was elected 34th governor of the Commonwealth of Kentucky a day after being shot in the chest by an assassin. A true asshole by any era’s standards — once referred to a political opponent as “Gonorrhea John” in print; described as having a “reptilian” appearance; Machiavellian in every sense of the word — Goebel’s self-serving actions and innumerable back-stabbings had created in Frankfort a climate of divisiveness and partisanship so rancorous that his only dying act as governor was ignored.

Goebel’s legacy as the sole United States governor ever to be assassinated reveals a key truism of Kentucky politics: Immutable in its wisdom, elegant in its composition, it is simply, “If we elect you, we reserve the right to shoot you.”

The above maxim also suggests something of a love-hate relationship between citzens and the Kentucky Democratic Party, which despite this murderous hiccup has remained the state’s dominant political party for the better part of 200 years. Since Kentucky’s admission into the Union, a Democrat has held the governorship roughly 50 percent of the time. Now, the KDP is looking to expand its power into the state Senate during a period when the Obama administration is flailing, real progressivism remains sidelined, the conservative “tea bagger” movement is mobilized, big business runs the show, and Gov. Steve Beshear’s 47 percent approval rating, inability to pass expanded gaming, and recent mining cabinet scandal could suggest doom for the party in 2010 and, perhaps, beyond.

The current KDP-sanctioned strategy to retake the state Senate — which Republicans control by a mere three seats — has consisted of 1) appointing a Republican into a cabinet-level position or judgeship, then 2) pushing to fill the vacant seat with a Democrat in the required special election. So far, the Dems’ record is 2-1: Democrats Robin Webb and Mike Reynolds bested their GOP opponents in the 18th and 32nd districts, respectively, earlier this year, but the recent defeat of Jodie Haydon by GOP-grocer Jimmy Higdon has put a damper of sorts on the plan. (It should be noted that the Reynolds special election was not the result of a seat vacated by a Beshear appointment.)

While Haydon-versus-Higdon wasn’t the national referendum on the public’s rejection of “liberal” Democratic policies it was advertised to be, the race’s outcome certainly affords an opportunity to examine the health, ideology and general prospects of a party whose tent is so big it threatens to collapse at any given moment onto the circus below.

On one end of the spectrum there’s 12th district Rep. Jim Gooch, whose party affiliation may fool you if you’ve examined his record for any period of time. A member of the legislature for roughly 15 years, Gooch chairs Kentucky’s Natural Resources and Environment Committee, where he has been viewed as something of an obstructionist by environmentalists and progressives within his own party for blocking the so-called Stream Saver Bill, which would severely limit the operating capabilities of coal companies in lieu of protecting fresh water tributaries from coal slurry run-off.

In many ways Gooch represents the typical Blue Dog strain of Democrat: Pro-business, small government, fiscally responsible and socially conservative — traits that largely characterize the makeup of the entire 138-member legislature, Democratic or Republican. In Gooch’s own words, however, he considers himself “a traditionalist” more than anything.

“We seem to have a lot of people in the legislature who are small-business oriented,” Gooch said. “I think that people who know what it’s like, as I do, to start and run a small business — who has to worry about making payroll, to invest money and create jobs — it’s a tough thing to do, but not everyone can work for the government.”

When asked if he thought Beshear’s falling approval ratings could be a liability for members in his party seeking re-election, Gooch deflected and said the things Democrats should be most fearful of are the priorities of the Obama administration.

“I think (we) should be concerned about running away from the radical agenda coming out of Washington,” he said. “One of the biggest issues that we have right now is a bad economy in Kentucky. We need policies from Washington that will encourage people to invest money, create jobs. Instead, people in Washington want to punish people for being successful. Cap and trade would destroy Kentucky’s low utility rates, which obviously wouldn’t help us.”

If this sounds like what you’ve been hearing from the Blue Dogs — and, for that matter, Republicans — on a national level, you’re not mistaken. Gooch is, if anything, a symbol of the party’s entrenched “traditionalist” bent, much of it wedded to corporate (i.e. coal) interests. The same is true for both parties. So who better to articulate an alternative Democratic viewpoint than Mike Slaton, an unelected, unentrenched and openly gay upstart from the Big City?

“I think the Democratic Party continues to move forward at a very slow place,” Slaton said, “like a car stuck in first gear: It goes forward in spurts, and slowly, but generally it does move forward. In Kentucky, there’s more of a live and let live mentality when it comes to some moral issues, so we haven’t gone off the conservative deep end that some (Democrats) in other states have. If anything, we’ve managed to retain a lot of people in our party that in other states have jumped ship to the GOP.”

Slaton, a Louisvillian and employee of Metro Parks, is seeking to unseat fellow Democrat Tom Riner in next May’s primary and capture the 41st district in the general election. If elected, he will be “one of about 10 progressives in the entire 138-member congress,” replacing an incumbent who introduced legislation that would’ve mandated displays of the Ten Commandments in courthouses across the commonwealth.

Considering that Christmas is upon us, most of the Democrats I sought interviews with were either preparing for the holiday or the upcoming General Assembly session, which begins Jan. 5, and were largely out of pocket for comment on a winded article about party ideology. But somewhere in the chasm of opinion that divides Democrats like Gooch and Slaton is a river of commonality, which is, to belabor the metaphor, a need to fix the state’s economy, which is projected to suffer a $1 billion shortfall in the coming fiscal year.

Don’t expect them to agree on how to fix it.