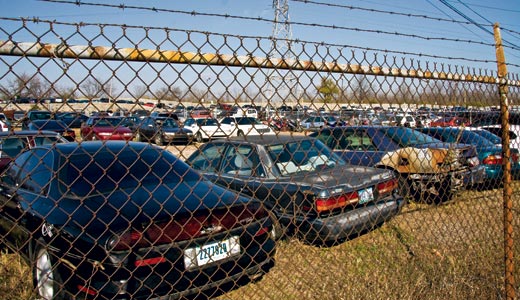 Just past a floodwall on the edge of Clifton, Frankfort Avenue dead-ends at an abyss of automotive misery. Rows of cars, trucks and mopeds sit parked behind a chain-link fence. Many of the offending vehicles were dragged here after they were cuffed with an immobilizing round yellow boot.

As of last Thursday, 1,038 automobiles sat in the Metro Louisville Vehicle Impoundment Lot. One of those cars belonged to Jean Thornton, 52, who spent two days last week desperately trying to retrieve her ride. Although Thornton’s daughter — who had borrowed the car — adequately fed the downtown meter at 3:15 p.m., the vehicle remained parked on Liberty Street near Fourth during the afternoon rush hour, and a sign there clearly indicates parking is prohibited between 4 and 6 p.m. As a result, the car was towed.

Thornton scraped together $115 to retrieve her car, but because she also had expired tags, she couldn’t drive it off the impound lot. She went home that evening and arranged for a tow truck to meet her at the impound lot, but when she returned the next day there was more bad news.

“They told me I had $70 worth of tickets, and that the only way I could get my car was to get my tickets paid first,” she says. “The parking place was closed so I had to wait (until the next day).”

Thornton ended up paying $210 for the three tickets, impound fee and a tow truck, which is why she now avoids parking downtown if she can help it. “If there’s a trolley or bus that I can catch, that’s what I will do,” she says. “I never did like parking downtown anyway, and I will try not to, and tell everyone else the same.”

Granted the car was parked illegally, and Thornton admits she knew about one of the tickets, but she insists she had no idea about the others. The result was a bureaucratic nightmare that an increasing number of city drivers (likely accustomed to years of lax rules) should expect to experience since the city drastically stepped up parking enforcement and implemented harsher penalties.

On Oct. 1, Metro government and the Parking Authority of River City announced new enforcement efforts — including increased use of those notorious yellow boots — to crack down on scofflaws who owe the city more than $8.5 million in unpaid parking tickets. The stricter policy is a continuation of a three-year effort by the city to get more serious about parking enforcement.

“For many years in this city, people just ignored the parking laws. And if you got a ticket, we weren’t aggressive about getting it paid,” says Chris Poynter, a mayoral spokesman. “It was sort of a joke. We didn’t have the boot, and there was no incentive for people to pay their tickets. With downtown really booming we needed those on-street parking spaces to turn over instead of people treating them like their own parking spot.”

The city and PARC recently increased the fee for delinquent tickets from $30 to a $55 maximum fine per violation. In addition, drivers were warned that vehicles could be immobilized with a boot — which costs an extra $50 to remove — if they have two unpaid citations, even if they are legally parked. Previously, parking enforcers could only boot cars that were illegally parked and had three unpaid tickets.

Since October, PARC officials report that the agency has collected $42,860 in outstanding fines as a result of the harsher penalties. Though PARC officials say there has been increased compliance in recent months, there are still approximately 24,000 drivers with unpaid tickets.

Louisville attorney David Mour has been challenging the city’s Parking Authority for years.

In 2007, Mour filed suit in federal court claiming the city fails to inform violators of unpaid tickets and their appeal rights via certified mail, as required by state law. Mour had reportedly racked up $250 in parking tickets, a fact his critics were quick to point out after he filed the lawsuit, which nearly a dozen other plaintiffs joined.

When the city briefly suspended the boot program as a result of that lawsuit, officials admitted it was too costly to send out a $2.79 certified letter for every violation, and so they simply weren’t doing it. Now city officials claim they are in compliance with the law, saying PARC notifies violators by mail within seven days of a ticket being issued. If the infraction is not paid, they follow up with a letter sent by certified mail.

Eventually a federal judge ruled the lawsuit instead belonged in state court, and Mour filed a new claim, this time in Jefferson County Circuit Court. In a 39-page motion, Mour is requesting a temporary injunction preventing the city from booting any vehicles, and he again questions Metro government’s notification procedure.

“I’m telling you they’re not complying with law. They are sending out some certified letters, I’ll give them that. But if you read them they’re not advising people of their appeal rights,” he says. “They’re basically collection letters saying you have five unpaid tickets, please pay them and go to our website for your appeal rights.”

A judge is expected to consider Mour’s request for an injunction at a Jan. 8 hearing.

“If Mr. Mour would spend as much energy fighting real issues in this city as opposed to parking tickets, our city would be much better off,” Poynter says. “If he spent as much time helping some nonprofits in this city as he is suing the city, we’d be a much better city.”

Sitting behind a cash register and punching in the day’s receipts, Jeff Kopple, co-owner of Sicillian Pizza & Pasta on Fourth Street, doesn’t know whom to believe when it comes to parking rules.

PARC enforcement officers have told him the city allows up to 30 minutes for deliveries if work vehicles have their hazard lights blinking. But last week, after spending 10 minutes carrying an $80 catering order into the Hall of Justice, he returned to find a yellow boot on the truck he recently bought from his father.

To prevent the truck from being impounded, Kopple visited PARC’s downtown office and pleaded his case, but they refused to waive his citation or set up a payment plan.

“I had to pay $590 for everything, to remove the boot and for all the back tickets, which are tickets on every vehicle under my father’s name,” he says. “That could have been my sister’s car when she was 16 years old or my brother’s when he was 18 years old.”

PARC officials indicated they had issued a certified letter about more than a dozen tickets owed, but Kopple says it must’ve gone to another address because he never saw the notice.

“It’s just frustrating that I was ticketed and booted when I followed all the rules I was told to do by the Parking Authority,” Kopple says. “I just felt let down that we’re told these things by one person, and another person will say something different, and none of them are true.”

At this point, however, Kopple and other disgruntled city drivers should be thankful PARC has not started enforcing its stricter policy of booting legally parked vehicles with as few as two unpaid parking tickets.

Although the new booting procedure is officially on the books, it is unclear exactly when it will take effect, or why it isn’t currently being enforced.

“I really don’t have an answer on why we haven’t implemented it yet, we just haven’t. It could happen, but we haven’t yet,” says Cathy Duncan, executive administrator of PARC.

For now, consider it a reprieve in the move toward big-city parking enforcement, which is welcome news for PARC officers like Shawn Wall, a five-year veteran. Carrying a handheld computer, a small printer and a pack of green envelopes, Wall says he tries to help drivers avoid citations when he can.

“The parking wars aspect is not what’s really going on out here despite what people think,” he says. “You don’t get in very many confrontations, and it isn’t all about writing tickets.”

For more on the history of parking in Louisville, as well as things you should know before feeding the meter, visit www.leoweekly.com/news.