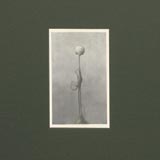 Matthew Cooper’s brain must be an interesting place to visit, if for no other reason than its idyllic landscapes. There’s probably a glacier, cracking and collapsing into an ocean not unlike the one he sees out West, where he’s lived for the last decade. There’s a dense, old-growth forest specializing in fractured sunlight, and the occasional thunderheads using lightning bolts like unsteady legs intent on solid footing.

All these scenes coalesce into a seven-LP Box Set, Life Through Bombardment, under Cooper’s moniker, Eluvium. The limited edition 100 copies, two years in production, combine these studio releases into one sonic windfall that emerges and evaporates without a definitive beginning. Cooper’s penchant for synths as atmosphere artfully draws comparisons with the likes of Christian Fennesz and Cooper’s own tourmates, Mono. It’s nice to see a product so patient it hurts.