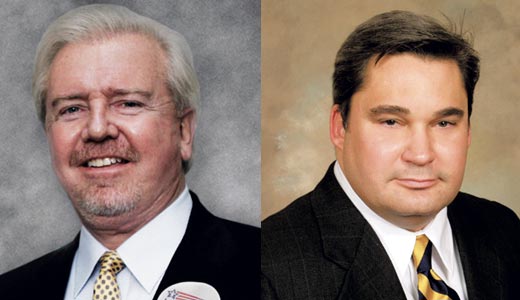 Hoping to ignite a debate about public safety and to generate more support in west Louisville, mayoral candidate and Metro Councilman Jim King, D-10, held a press conference in the Park DuValle neighborhood to announce a number of policy initiatives aimed at strengthening Metro Police and curbing crime.

Joined by community activists and former law enforcement officials, King said that if elected mayor, he would restore the LMPD gang unit, revitalize the street crimes unit and earmark additional funding for the existing narcotics unit.

“Violence has plagued our community for many years. Gang violence is on the rise,” he said, adding that as mayor he would oppose any cuts to the police department.

These campaign promises would reverse many of the changes initiated by Chief Robert White, who six years ago created a leaner and more de-centralized set of flex units to deal with street crime.

In response, White had some harsh words for the candidate: “Councilman King has not had a conversation with me as it relates to the strategies of policing. And I would like to think that whoever becomes the mayor … would afford their police chief an opportunity to have a conversation with them about what those best strategies for providing safety to this community are. If by some chance Councilman King has done that with whoever he would like to become the chief, I would suggest that person doesn’t have a clue what it takes to run the Louisville Metro Police Department.”

Chief White was surprised by King’s statements, but pointed out a contingent has always been resistant to the policies he enacted. White also reminded reporters during a hastily called press conference that this year, the city is on pace to see its largest decrease in crime since city and county governments merged in 2003.

King told the press that the chief has been struggling due to budget cuts, which White agreed have been challenging in recent years. Whether the King campaign will unveil specifics on how to pay for its augmented crime-fighting initiatives is unclear, but King has undoubtedly started a conversation that resonates deeply with west Louisville residents.

The King campaign has heavily courted west Louisville voters over the past few weeks, including well-known community activists and ministers, knowing that in a Democratic primary the predominately African-American area will be key.

Councilman Tom Owen, D-8, has become the first to formally declare an interest in the Metro Council presidency. In a letter to colleagues, he pointed out that next year city lawmakers will face ongoing budget woes and a lame-duck mayor, while a few members will be distracted by their own mayoral aspirations.

The University of Louisville archivist believes his 15 years of legislative experience going back to the days of the Board of Alderman will serve the council well.

Two other possible contenders for the presidency are Councilwoman Marianne Butler, D-15, vice-chairwoman of the Democratic caucus, and Councilman Ken Fleming, R-7, who is being encouraged and is still considering a run. The two city legislators are sponsoring dueling versions of a hotly contested ethics ordinance, meaning the nomination of either could further divide the council.

Among the three possible contenders, it’s clear the pathway to the council presidency would be most difficult for Fleming. Any GOP candidate is a long shot, although the crafty minority caucus did manage to nab the presidency in 2004 and 2006.

Since voting to dump majority caucus director Kenya McGruder by the end of the year, council Democrats have been taking applications to fill the position.

At least two candidates have applied, and Democrats consider both favorable choices. Democratic caucus spokesman Tony Hyatt, who has served as the majority caucus’s communications director for the past three years, confirmed he applied for the position and says he envisions merging the caucus director and communications director to streamline operations, similar to how the council GOP functions.

The other candidate is Deborah Kent, vice president of the League of Women Voters, who confirmed she has applied for the job but declined to comment for this story.

Whoever ends up getting the job should expect a tough time navigating the majority party’s notoriously grumpy groupthink. There are also no assurances this hiring process will go smoothly. Council Democrats have a history of butting heads over their partisan staff. Since Metro government formed, Democrats have had three different caucus directors, while Republicans have kept the same since merger.

Last week Mayor Jerry Abramson made an appointment to the Pleasure Ridge Park Fire District Board, prompting Councilman Doug Hawkins, R-25, to call the move a political takeover that usurped the vote of the people.

The Fire District Board held an election in July but, after allegations of electioneering, declined to certify the results. The contest that produced a winner was held in September; however, that election apparently was not recognized under state law. Hoping to avoid picking sides in the controversy, Abramson opted to select his own appointee — Rosemary Mattingly, the wife of Councilman Bob Henderson’s legislative aide.

“This is about the mayor stealing the vote from the citizens of Pleasure Ridge Park,” says Hawkins, who knows how to inflame the anti-Abramson crowd. Critics suggest it’s a means to help him retain his council seat and defeat a strong Democratic opponent, David Yates. Last week, Hawkins sent e-mails to constituents accusing the mayor of plotting to take over the district board.

But Hawkins contends that’s a smokescreen by Democrats trying to hide the fact that the mayor appointed “one of his cronies.”

Democrats are expected to push the appointment through at this week’s full council meeting.

“I think the people of the community are used to the ranting and ravings of Doug Hawkins,” says Chad Carlton, a mayoral spokesman. “And this is just another in a series about things where he doesn’t have his facts straight and is misinforming citizens about what’s going on.”