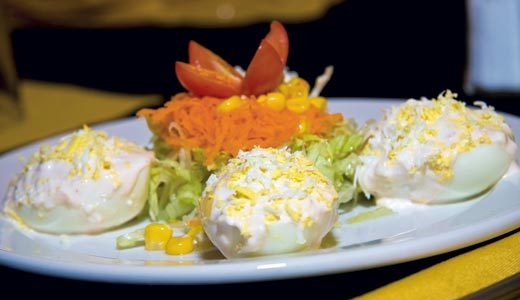 Adding more options to Louisville’s growing ethnic-eats scene, two interesting restaurants have opened in recent weeks, offering dishes that your mother never made at home … unless your mother came from the Caribbean or Barcelona.

Cocos Lokos (“Crazy Coconut”) has been open for a few weeks in the Hunnington Place shopping center near I-64 at Hurstbourne. Started by former employees of Havana Rumba, it offers Cuban cuisine accented with a few dishes from around the Caribbean.

La Catalana (“The Catalan Woman”) opened last week in the short St. Matthews strip center that also houses Havana Rumba and Del Frisco’s, just behind … wait for it … where the old Sears store used to be. It’s Louisville’s first restaurant featuring the Catalan fare of Barcelona, Spain, plus a selection of dishes from around the Mediterranean.

Both spots are still too new for full-length reviews and formal ratings, but in quick stops for lunch recently, both impressed me. I enjoyed interesting and well-prepared dishes, competent and friendly service, and distinctive moods.

La Catalana’s extensive menu features nearly 50 items, including a full page of appetizers, soups and salads, most in the $5 range. Some 20 “meat and fish” courses are mostly Catalan and listed with both Catalan and English names, ranging in price from $7.25 for Llibrets de Pork (“pig book,” something I’m going to have to try), to $17.75 (for several items including Solomillo al Roquefort, a 10-ounce sirloin steak sauced with milk, cream and blue cheese). Another eight “rice and pasta” dishes range more widely around the Med, from $5.50 (for eggplant Parmigiana) to $11 (for arroz Mediterraneo, a paella-like mix of squid, shrimp, clams, mussels and fish, peppers onions and rice).

My three-course lunch of the day ($10) was filling, including complimentary gazpacho and grilled tomato bread, a first course of Ous Farcits, “stuffed eggs,” three hard-boiled eggs filled with shredded tuna and sauced with a garlicky aioli, plated with a light salad; a beef stew that could have been just like Mom’s but for elusive spice; and a pureed fruit dessert.

This one’s worth checking out.

Briefly told, Cocos Lokos makes attractive use of a large shopping center space. The two-room restaurant offers a large, fashionably dim dining room with a striking sunset-and-palms mural along one wall, and a cozy bar with antiques and tobacco-leaf fans that could have come direct from Old Havana.

A good selection of Cuban dishes includes most of the standards, with just about every main course attractively priced in the $10-$12 range. My favorite, Lechon Adobado ($11.99), features pork roast marinated in pineapple, garlic and citrus, then roasted long and slow until it falls apart like an aromatic Cuban version of Kentucky “pulled” pork barbecue. It comes with congris (Cuban beans and rice) and an addictive version of yuca (cassava), cut into sticks, lightly flour-dredged and deep-fried until the outside is glassy crisp and the interior steaming.