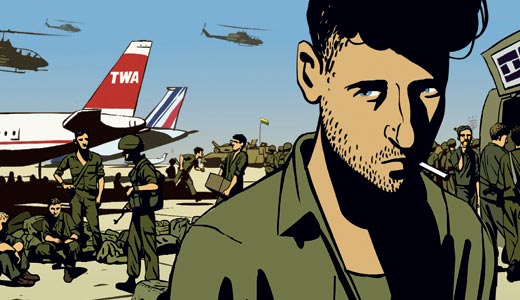 Waltz with Bashir — This is far and away the best movie of the year and a hell of a note to end the decade on. An animated film, it follows Israeli director Ari Fulman’s gradual realization that he was involved in the Sabra and Shatila massacre (in 1982, the Israeli army was complicit in the murder of thousands of defenseless Palestinian civilians by Lebanese Christians). It’s a difficult truth for the son of Holocaust survivors. He emerges a pacifist and peace activist.

Fulman chooses honest self-criticism over convenient denial, and he rejects savagery for compassion. These aren’t just artistic strengths but human ones. And rare ones at that. It’s heart wrenching, but it also instills hope that we can actually learn from our mistakes if we so choose. Disclaimer for the purists: It was released in New York and L.A. last year and made it onto a bunch of lists in 2008. Smaller markets (including Chicago) only screened it in 2009. We got a print in February.

Hurt Locker — This is a war movie with many interpretations: a suspenseful action movie, a story about the unpredictability and chaos of America’s new wars, an anti-war film, a glamorization of soldiers. For me, ultimately, it’s about men and the culture of men in the most extreme, male-dominated place on earth: the combat zone. Although women are increasingly involved in combat and have always been victims of war, men have established its rules and customs, and it’s here that we can see ourselves in our most extreme version. Ironically (or perhaps not), a woman — Kathryn Bigelow — directed the film.

In the Loop — A satire about the nature of British-American relations in the 21st century and the sad reality about politics in the media age. And funny as hell. Example: “At the end of a war, you need some soldiers left, really, or else it looks like you’ve lost.”

Summer Hours — Director Olivier Assayas is hard to peg and, to be honest, not very consistent. Happily, “Summer Hours” is his best movie in more than a decade. Warm, kind and thoughtful, it follows a French family as they divide their mother’s considerable art collection. This is a way for Assayas to ask big questions about his country’s cultural legacy and future. Another success for the “Louisville Exclusives” series at Village 8.

Sugar — I’m a baseball diehard, so it was a pleasure beyond
belief to see a smart, touching

baseball movie. Definitely better than the World Series this year.

Inglourious Basterds — A blood-soaked fairytale (“Once upon a time in Nazi-occupied France …”) in which the entire apparatus of cinema — actors, projectionists, critics, exhibitors, even the celluloid itself — rises up collectively to purge itself of Ultimate Evil and its flickering propaganda machine. Detractors called Quentin Tarantino everything from a feckless punk to a Holocaust denier, but his expertly unfurled WWII epic hails from the same alternate universe as every movie that attempts to recapture history. His is just a little more up-front about the artifice — as when his Basterds dish Hitler the payback that the record sadly omitted.

Summer Hours — You don’t have to be the child of aging parents with a houseful of antiques to appreciate Olivier Assayas’s quietly devastating family drama — but if you are, you probably spent the ride home emptying a box of Kleenex. A sober, subtle consideration of the worth we assign to objects, it offers the underlying message that all sentimental value inevitably dwindles to zero. But in the year’s most elating ending, Assayas shows young people flooding an empty ancestral home with new life, new loves and new memories — the past as a renewable resource.

Drag Me to Hell — Instead of using his “Spider-Man” clout to make some prestige picture reeking of mothballs, Sam Raimi dashed off this proudly disreputable splatter movie: a hilariously sick, hyperkinetic horror comedy about a gypsy curse visited upon an eager-beaver foreclosure officer. It was perfectly timed, in every sense, but it wasn’t a hit: Now that it’s on DVD, gather a couchload of your rowdiest friends, recreate the ambience of a moonshine-stoked drive-in circa 1981, and prepare for some of the best gotcha! scares since Michael Myers wore clown masks.

Duplicity — Perhaps because it came wrapped as light entertainment, with Julia Roberts and Clive Owen playing devious lovebirds engaged in wizard-level corporate espionage, nobody seemed to notice the intricacy and craft of Tony Gilroy’s script — not just its clever time-shifting and sly withholding but its attention to the power and meaning of the well-chosen word. Would that all exposition were delivered as deftly as the credits sequence, which distills the bitter rivalry between tycoons Tom Wilkinson and Paul Giamatti to an uproarious slow-motion montage of lumbering beet-faced conflict.

Julia — Maybe the year’s most criminally underseen movie, with a death-defying lead performance from Tilda Swinton that deserved all the gonzo accolades Nicolas Cage got for “The Bad Lieutenant: Port of Call — New Orleans,” director Erick Zonca’s gripping drama proceeds from a kidnapping-gone-awry plot worthy of a Jim Thompson pulp thriller. Watching Swinton’s dry-mouthed, booze-addled tough cookie connive her way out of one lethal scrape after another produces a rare kind of suspense: that of seeing a character think for her life in real time.

You don’t need me to tell you that “Up!” and “Inglourious Basterds” are the top name-brand American films of ’09. Instead, here are the best releases you may have skipped.

You, The Living — A multi-character Swedish film about dreams. If you just thought yawn, you wouldn’t be entirely off base. Roy Andersson’s static photography and pale, dusty palette may invoke sweet repose. However, “You, The Living” offers many rewards for remaining wakeful, like mobile apartment complexes that rumble into train stations, random tuba solos and possibly the most expensive, failed attempt at the tablecloth trick of all time.

Thirst — A priest turns vampire after medical complications and embarks on a thigh-biting kink-fest with a married woman. With the exception of “Old Boy,” Chan-wook Park’s masterpiece, I’m often tempted to quit on the films of this South Korean director. Then, like clockwork, something I’ve never seen before unfurls, and I’m knocked back into my seat. “Thirst” contains enough WTF moments to satiate viewers, particularly those who appreciate splashes of art with their splatter films.

Goodbye Solo — Solo, a buoyant, Senegalese cabbie, hopes to thwart the suicide of a miserable old white dude. Another clear-eyed glimpse into immigrant life from Ramin Bahrami. No current filmmaker captures the changing complexion of the American dream as consistently as this director of “Chop Shop” and “Man Push Cart.”

Gomorrah — A roaming camera trails assorted criminal-types as they attempt to get into, get out of, or move up in Camorra, Italy’s infamous organized crime syndicate. Viewers expecting Scorsese in Italian will be disappointed. “Gomorrah” brings the same violence and grit but offers a less sympathetic, more complex narrative. Closer to a Stephen Gaghan or Tony Gilroy-style film where only the essential is explained, Gomorrah’s hand-held camerawork feels part documentary, part war footage. This bug’s eye view of Naples’ crime-infested slums is difficult to cleanse away.

Moon — Director Duncan Jones and near-one-man-show star Sam Rockwell managed to create a real rarity these days: a thoughtful, thrilling sci-fi film with beautiful, organic design and effects rather than CGI explosions. “Moon” is a wonderful throwback to the glory days of “2001: A Space Odyssey,” “Alien” and “Silent Running.”

The Hurt Locker — From Kathryn Bigelow, the woman behind one of the best vampire movies ever (“Near Dark”) and the best surfing/bank heist movie ever (“Point Break”), came one of the best films dealing with the Iraq War. “The Hurt Locker” is true to its name: a ridiculously tense ride through the mouth of hell that is bomb disposal in a war zone — and with complex human characters to boot.

Where The Wild Things Are — This adaptation of the worshipped picture-book classic seemed destined to be controversial, but rather than a tasteless assault on the senses like the Jim Carrey “Grinch” or a bland computer-conducted production a la “The Polar Express,” writer/director Spike Jonze gave us a stunningly gorgeous portal into the mind of a child, filled with living, breathing monsters that were somehow scary, sad, funny, ugly and beautiful all at once.

A Serious Man — This will probably go into the subsection of Cohen Brothers movies that are the darkest, most personal and quirkiest. “Barton Fink” is in there. So is “The Man Who Wasn’t There.” These movies don’t draw immediate widespread acclaim, but they have depth and staying power. “A Serious Man” turns the quotidian horror of a put-upon science professor’s family troubles into a 20th century Job story that’s both seriously hilarious and thought provoking.

Inglourious Basterds — Geez. What can you say? Do you like Tarantino? Because this is him, full tilt, even more than usual. He gets away with stuff no one else dares to try. Basically, this is “Pulp Fiction” in WWII Europe. It’s overloaded with idiosyncratic characters, has brilliantly choreographed action set pieces, contains at least one totally indelible performance (Christoph Waltz as Hans Landa), and has reams of quotable dialogue. This is a violent fantasy of what should have happened to the Nazis, and a reflection of our collective guilt over that grand failure as a human race … but a really fun one!

Well, apparently I didn’t get out much this year. When thinking of my top-five favorite films, I could barely even name five I had seen. And when I started researching the films of 2009, I realized all the highly touted ones were hanging out in my Netflix cache, waiting to called into duty. Chew on my list with a wad of Jujubes.

Paranormal Activity — It’s like tequila: You know it’s bad for you, you know it’s going to rattle your inner core, and you know you’re not going to feel the same after, yet you still willingly subject yourself to its poison with a smile. This film definitely rattled me for days after — I’m still afraid to sleep with any limb outside the sheets.

The Blind Side — Sure, feel-good movies of this nature are sappy, over-simplified and smooth around the edges, but this yuppie-family-adopts-ghetto-offensive-lineman story is bittersweet. And I have a soft spot for Michael Oher and the Baltimore Ravens.

The Hangover — Who hasn’t awoken to a tiger, a stripper and a baby after a bender in Vegas? This story of a bachelor party gone wrong was hilarious, naughty and brilliant. Earned every bit of its R rating.

Precious — No one told me the price of admission included a dark cloud that would loom for days. “Precious” was touching, inspirational and unsettling. If your worldview is saturated with sugar and spice and everything nice, this film reminds you that cavities are always lurking.

Michael Jackson’s This Is It — This doc shows not a frail, decrepit, falling-from-grace pop star but a man at the top of his game, driven by immense talent and passion. This is Michael Jackson, onstage, dancing and singing, gyrating and directing, giggling and teaching. He’s bad.