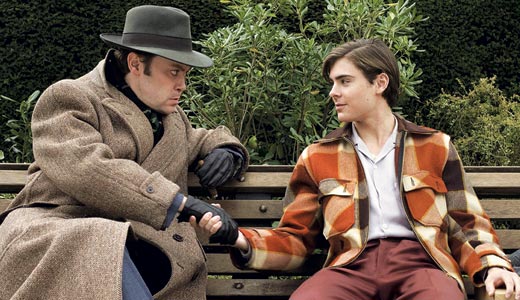 “How the hell do I top this?” wonders an elated Orson Welles. It’s opening night at The Mercury, his new theater company. Welles has just debuted a dangerous-for-1937 retelling of Shakespeare’s “Julius Caesar” and, after a week of flooded sets and personnel clashes, is being met with thunderous applause. There’s little time to bask in it, though, as Welles appears to have answered his own question. The proverbial light bulb has gone off and, without a word, it becomes clear that the impresario’s next bold act is imminent. It’s an epiphany that I hope rubs off soon on Christian McKay, the actor who so deftly delivers it in the new film “Me and Orson Welles.”

McKay assumes the role of mentor/tormentor to Richard (Zac Efron), an aspiring actor who charms his way into the play. The story follows each of them through a week that proves life altering for both. Seen by some as a vehicle to “legitimize” a young heartthrob, it’s a safe bet that Efron will be sticking around for a while. His leading-man qualities shine, but it’s McKay who seems poised for a break-out.

McKay does more than an uncanny impersonation. Yes, it’s tempting to close your eyes and imagine Welles in the room with you — McKay’s baritone and cadence are that similar. If you do this, though, you may miss some of McKay’s best stuff, those nonverbal, light-bulb moments. Throughout the film, he provides manipulative glances and cocky gestures, grinningly throwing his arm around one of his actor’s girlfriends before sweeping her into his cab. During Caesar’s assassination scene, the emperor’s famous last lines are nearly upstaged by a murderous sheen that glosses over McKay (while playing Welles, playing Brutus). “You can see the entire assassination on his face,” says director Richard Linklater, when I asked about this chilling moment by phone last week. “It was incredible to have a front-row seat to that. If you saw him on the street, you wouldn’t think, ‘There goes Orson Welles.’ But Christian dials in all that — the eyebrow, the voice.”

But McKay credits the scene to Simon Nehan, the actor who died so effectively as Caesar. Apparently, it was Nehan who got the cast loosened up. “You probably shouldn’t print this,” warns McKay. “Simon, he’s Welsh, you know? He’s got a beautiful bell in every tooth. He comes up to me and does Et tu, Brutus! And after eight or nine takes, suddenly reveals to us all: ‘That’s my orgasm face, you know?’”

With the tension dissipated and his cast composing themselves, Linklater jumped right back in, managing to capture the take that made it to the screen. It was group efforts like these that helped Linklater shepherd McKay through his first feature. A theater actor and concert pianist since childhood, McKay did benefit from the support extended to him by the cast’s experienced screen actors. It’s an amusing irony that Efron, the fledgling actor taken under Welles’s wing, was at times the tip-offering veteran in this pairing.

Moviegoers looking to “Buy Local First” this holiday season should heed the Hart/Lunsford stamp on the picture’s opening credits. Located just down the road from the film’s Louisville premiere, the production company is investing heavily in the back-end of the film. Ed Hart says the company is cautiously optimistic about an expanded release. “We had the No. 1 per-screen-average over the Thanksgiving weekend (in New York and L.A.). It may have been on only four screens, but we like our spot.”

The film hits 100 screens in 25 cities on Friday, and Hart hopes Efron’s young fans will bring their parents with them. If “Orson” is a hit with families, the company will consider a 500-screen push — Hart’s ultimate goal. Although the film has cross-generational appeal, the test may be with those who care little about Efron or Orson Welles (let’s call them 18-24-year-old males). “Orson” does heavily reference the old school. Even to someone who’s genuinely interested in Wikipedia-ing Horace Braham and Les Tremayne, it’s easy to feel like a bystander to a Broadway geek-out. The fixation with time and place is forgivable, though, as the flurry of names gives way to a charming and compelling narrative. It remains to be seen whether this happens before alienating a certain younger demographic.

In the meantime, Hart seemed pleased with the local premiere last week at Baxter Avenue Theatres, saying it was nice to show “Orson” here before other cities. As a third- or fourth-tier distribution city, Louisville often waits for limited releases that never show. For the undernourished cineaste, local involvement in a Linklater film certainly feels like a coup. Since founding the Austin Film Society and producing a $23,000 movie, Linklater has turned his hometown into a cultural focal point. The indie landscape has changed drastically since the days of “Slacker,” but it would seem a missed opportunity to let this walking business model skip town without a couple of pointers. What steps would the director take if appointed to a Louisville film board?

“It is amazing what a few passionate people can get done,” he says. “If it’s really there, if there is support for film, it can happen. You just have to nurture the audience.” Regarding film production, Linklater advised not to compete with bigger cities but to maximize the local culture. The industry is nomadic and will follow tax incentives. When those are suddenly voted down, so go the outside production companies. You want to have something indigenous that stands, regardless of what blows in and out of town.

And Hart/Lunsford’s role in this? Despite a recent shift to the distribution of known quantities, Hart says, “We’d love to do a whole shooting match here, but you have to be selective. You have to find the right one. It’s all got to coalesce around a good story.”

That story may be “Handcuffs,” a novel by Bullitt East High School English teacher Bethany Griffin. Hart/Lunsford recently purchased the film rights to the Louisvillian’s book and hopes to develop it for the screen.