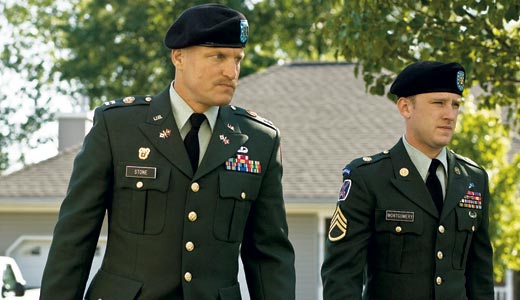 It’s hard to recall that Woody Harrelson started out as a lanky, clean-scrubbed male ingénue on “Cheers,” and that’s entirely to his credit. He’s evolving into one of those yeoman character actors whose name on a movie assures you something interesting will happen. He has the kind of unstable square-jawed looks that can tilt toward cold-blooded reserve (as in “No Country for Old Men”) or pinwheel-eyed madness (as in “2012,” where his kooky Dennis Hopper act is a welcome break from planetary devastation). But he’s best in roles where we’re not sure which way he’ll go — as in this quietly absorbing homefront drama about two Army officers given the grim detail of notifying dead soldiers’ next of kin.

Harrelson plays the more experienced of the two, a grizzled Desert Storm vet clinging to sobriety by his fingernails. He instructs his new partner, a wounded, prematurely embittered corporal (Ben Foster), in the rules of conduct he follows to the letter — no grief counseling, no hands-on comfort, and no fraternizing with the bereaved. At this point, you think, here it comes: The brash youngster will let down his guard, the crusty old-timer will learn how to feel, and the movie will wallow in well-intentioned sap.

But Oren Moverman, the film’s director and co-writer, has the nerve to channel honest confusion instead of imposing a big statement on the material. The two soldiers feel their way along: Every notification brings a different reaction, from howling disbelief to blind fury, and the well-matched Harrelson and Foster react to them like conscientious men performing a soul-crushing task that will never get easier.

“The Messenger” takes no overt anti-war stance, beyond the obvious: It means for us to consider the ripples of anguish every time a life is snuffed, whether the cause is just or unjust. Moverman, an Israeli Army vet, collaborated on the scripts for “Jesus’ Son” and “I’m Not There,” but his directorial debut is more straightforward and low-key than those credits might indicate. The movie fixes each grieving parent, spouse or child in a setting that suggests a small, specific world wrenched out of orbit. Thankfully, the notification scenes don’t turn into showy turns for guest mourners. Most of them (with two superb exceptions) are cast with unfamiliar actors, and their reactions seem wrenchingly natural and spontaneous, captured in long takes that don’t hype the already painful emotions into melodrama. More persuasive than the writing (by Moverman and Alessandro Camon) is the eloquent plainness of the movie’s New Jersey locations — a lower-middle-class suburb with wash on the lines and a ballpark nearby, an inner-city neighborhood where an ice-cream truck passes from view. Someone’s life as usual stops; everyone else’s goes on.

As the newbie, Foster, a rising star who all but stole the fine “3:10 to Yuma” remake with his turn as an itchy-triggered psycho, gets the more empathetic role. His hesitant, uncertain courtship of a newly notified widow (Samantha Morton) comes to a head in a beautifully underplayed scene where the two characters wrestle wordlessly at length with myriad conflicting feelings. But somehow your attention always goes back to Harrelson, with his desperate levity and uncomfortable bearing. It’s not the standard lit-powderkeg take on the suffering-soldier role; the movie doesn’t traffic in post-traumatic stress clichés. He’s what Jack Nicholson’s carousing Navy man in “The Last Detail” might’ve been, had his detail been a daily reminder of all the other men just like him who are never coming home.