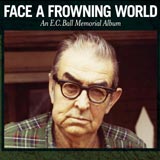 Estil Cortez Ball was a singer and fingerstyle guitar player from Rugby, Va. Before he passed in July 1978, he wrote countless folk ballads with his wife, Orna. Louisville native Nathan Salsburg mined this trove hoping to expose Ball’s gut-level gospel to a wider audience.

He chose his weapons wisely: Backed largely by The Health & Happiness Family Gospel Band, a blockbuster cast in its own right, Salsburg corralled a who’s-who (Jolie Holland, Will Oldham, Catherine Irwin) to recast Ball’s incantations with new tongues of spiritual fire. However interpretative or faithful, Face A Frowning World boasts enough jaw-dropping moments to require a tetanus shot, and not only by the usual suspects, either: Glen Dentinger’s rendition of “When I Can Read My Titles Clear,” from which the compilation takes its name, and Asheville, N.C., oxygen thief Rayna Gellert’s “Lord I Want More Religion,” are but two precious stones in this gilded crown.