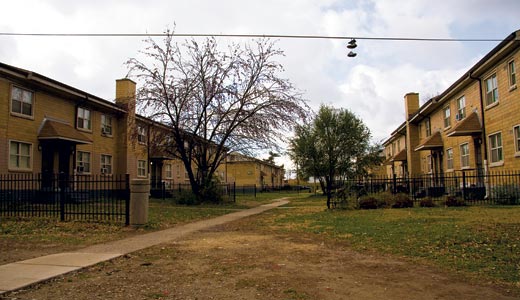 Michael Brooks lives and breathes the California neighborhood. The 53-year-old has resided there his entire life, and he now works in the west Louisville community as well. After earning a master’s degree in conflict management in the spring, he founded the California Community Mediation Center, which is dedicated to helping residents and businesses resolve disputes outside of court.

“I think it’s important for people who acquire certain skills to give back to the community what they’ve learned,” says Brooks, who also serves as president of the California Neighborhood Coalition.

Three generations of his family have lived in a West Oak Street home that they’ve owned since before World War II. Brooks says he remembers when black professionals once lived alongside thriving retail businesses in his neighborhood, but today it’s one of the city’s most impoverished communities.

Although he considers California home, at one point the Sullivan University graduate considered moving due to a surge in abandoned homes, vacant lots and violent crime.

“I thought, maybe I need to get out before I get robbed or worse. But it never has happened, thankfully,” he says. “A lot of residents remain here and do care about this neighborhood. We are not to where we were 30 years ago, but things are turning around.”

Trapped in an industrial headlock of unused properties and dead-end thoroughfares, residents in California and surrounding neighborhoods are desperate for economic redevelopment. In response, city planners have spent the past year devising a multi-year master plan to do just that for the area known as the Park Hill Industrial Corridor. Metro officials and consultants say the corridor is prime real estate for a significant overhaul that could bring real change.

And while many residents like Brooks welcome this makeover, it could result in hundreds of public housing tenants being ousted and scattered as yet another urban housing complex — this time Parkway Place — is demolished to make way for change. It’s a controversial move, but one that city officials and many longtime residents maintain is crucial in transforming this struggling area.

Bounded by the West End, Old Louisville and the University of Louisville, the 2,100-acre Park Hill Industrial Corridor includes parts of the California, Park Hill and Algonquin neighborhoods. Although once an important manufacturing hub, the predominately African-American area has declined due to plant closures and relocations that resulted in increased unemployment and poverty.

The corridor has a 16 percent unemployment rate with 48 percent of residents living below the poverty line, statistics that are well above the city average.

The goal of the master plan is to attract businesses, create jobs and better connect neighborhoods, says Susan Hamilton, assistant director of the city’s Economic Development Department. The plan’s overriding recommendation is to recast the industrial corridor as a center for green practices, products and services.

Hamilton acknowledges that finding public funding to encourage private investment will be a challenge with budgets stretched so thin; however, several projects are ready to begin.

In October, Mayor Jerry Abramson announced a number of immediate projects totaling more than $2.5 million to get the green push moving in the Park Hill Corridor. They include installing a green roof on the Metro Archives Building at 7th and Industry streets, initiating a $1 million Metropolitan Sewer District investment over the next three years in several green engineering projects throughout Park Hill, and installing 12 new sidewalks and making more than 150 sidewalk repairs and ramp replacements in the area.

“Our hope is to encourage private investment that carries out a community vision. The public funds are meant to attract private investment,” says Hamilton, adding that the corridor study has already spawned a Park Hill Business Association. “It’s a pretty ambitious plan. We’re looking out to the future five to 10 years. Each year new pieces of the plan will be implemented, and it has been phased that way over time.”

By far the most controversial part of the plan is the eventual demolition of the 637-unit Parkway Place housing complex at 13th and Hill streets.

“It’s really not a great location for housing anymore. It is primarily industrial and surrounded by abandoned factories and such,” says Tim Barry, executive director of the Louisville Metro Housing Authority. “It’s certainly high on the priority list and something we’d like to do and that needs to be done, but there’s no specific timeframe.”

Parkway Place residents would likely receive scattered relocation opportunities as the site is redeveloped with new businesses. Although Barry acknowledges the 66-year-old complex will almost certainly be demolished as part of a citywide effort to break up pockets of poverty by eradicating old barracks-style facilities, he is uncertain exactly when that might occur.

The city has already razed two other housing projects and recently announced it has applied for a $20 million federal grant to tear down the historic Sheppard Square complex.

For lifelong California resident Michael Brooks, whom the mayor appointed to serve on the master plan’s advisory committee, the possibility of displacing public housing residents is troubling.

“Anybody that’s going to be scattered is a worry of mine. I care about people being displaced,” he says. “It’s a sticky situation.”

The demolition of another housing project presents community advocates like Brooks with a dilemma when weighed against the promise of long-overdue job creation and development. In the end, he believes reversing the area’s economic despair is paramount.