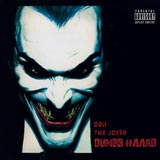 It’s agonizing to listen to an album whose production far exceeds the abilities of the artist named on the cover. The clear star of this album is producer Dr. Gonzo. On all but five of the disc’s 18 tracks, the good doctor continues the excellence found on Scanners, his collaboration with vocalist Nacirema, with the same jazzy and energetic ’90s throwback beats providing the background. Doh, not for lack of trying, just doesn’t have the solo charisma capable of carrying a whole album. He is often all over the beats, sometimes in front, occasionally behind, only rarely is he riding the one, and I’d be willing to bet this is never intentional. It’s truly a shame, as many of these beats deserve more than what they’re given. Doh the Joker strikes me as a rapper who would be best served in a group setting, with all the benefits a group provides: more structure, focused content and the pressure to say everything you need to say in one verse, compared with three and a hook. I hear talk of a soon-to-be-released follow-up to Dumbb Haard. Here’s hoping friendly intra-label competition brings the best out of Doh next time around.