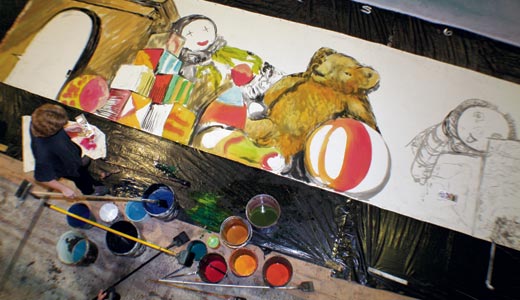 The Louisville Ballet’s annual production of Tchaikovsky’s “The Nutcracker” ballet gets a major re-imagining for this holiday season, with all-new sets and costumes. A fresh stage treatment by San Francisco choreographer Val Caniparoli is also promised for the show, which runs Dec. 5-20 in Whitney Hall. The new “Nutcracker” creation now takes the name “Brown-Forman Nutcracker,” recognizing Louisville Ballet’s longtime corporate backer, which contributed $1 million to underwrite the new production.

Peter Cazalet designed the new costumes and sets, which were fabricated in South Africa. Special touches by illusionist Marshall Magoon help create the magical fairytale world in which the ballet is set.

And speaking of a fairytale world, nothing better conjures up the musical imagery for a dancing sugar plum fairy than a celeste — the tinkly toned, piano-like instrument Tchaikovsky heard in Paris and specified for his 1892 debut of the “Nutcracker.” As public radio host Bob Edwards notes, “People may disagree what a sugar plum fairy looks like, but everyone knows how one is supposed to sound.” Tink-tank-tink, tink-tank-tink … Countless composers since Tchaikovsky have created their own heavenly “celestial” sound with the celeste — including Buddy Holly in his song “Everyday.” The Louisville Orchestra’s Grace Baugh-Bennett plays the celeste for the “Nutcracker.”