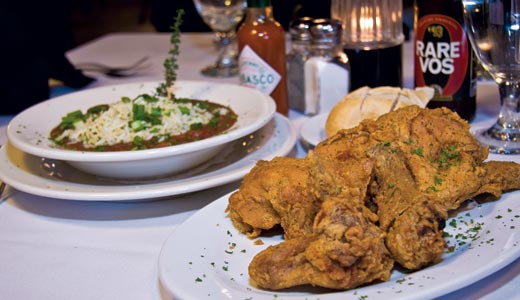 The sturdy brown-painted brick building near the top of the hill where Vine Street rises from Broadway toward Breckenridge Street has been an east-of-downtown landmark since 1872. It has served as a saloon, a general store and then a saloon again.

Since around the time of Louisville’s 1937 flood, it has been a neighborly eatery and pub, known for cold beer and a signature roast beef-and-mashed-potato plate.

In 2000, under the guidance of new owners Gail and Billy Darling, it added an upscale component: Enter and stay on the right and you’ll enjoy the friendly bar, which really hasn’t changed much since the 1937 floodwaters receded. But walk to the back of the room, turn left, go down a small slope and you’ll pass — like Dorothy entering Oz — into a much more stylish room where the scene is casually artful and the fare upscale.

For several years, Chef Jerome Pope presided here, offering an eclectic menu based on traditional Southern fare. After Pope departed for the short-lived Stratto’s in Clarksville in 2007, a space opened up in the kitchen for Richard Lowe, an excellent chef from New Orleans who migrated to Louisville after Hurricane Katrina.

With little publicity other than word of mouth, Lowe has added a distinct Creole and Cajun flavor to the Coach Lamp’s menu, offering a new and compelling answer to the often-argued question, “Who’s got the best N’Awlins-style fare in Louisville?”

Lowe attended Delgado Community College in the New Orleans area, and before Katrina he worked in many local restaurants, ranging from the French Quarter’s familiar Pat O’Brien’s to Agave, Martinique and the Tchefuncta Country Club.

On several occasions I dropped by for lunch, not really in review mode, and was pleasantly impressed. A recent invitation to join a crowd for a special Cajun banquet with a series of off-menu delights fairly blew me away, and it wasn’t long before I returned for lunch, wearing my critic’s hat.

The dining room, as noted, presents an entirely different atmosphere from the dark, tavern ambience of the bar side. A long room runs the full length of the building, with eye-catching swags of bright red fabric hanging diagonally from the ceiling in a zigzag pattern. The front half of the room is walled in broad boards of knotty pine; the rear is exposed brick painted pale gray. Floor tiles are reddish-brown, gracefully aged and possibly as old as the building itself.

Galleries of large paintings hang around the room, varying in style from realistic to surreal. It’s sufficient to say that the overall mood is edgy, artsy and modern while remaining respectful of the building’s long heritage.

It appears that the room could accommodate maybe 100 diners when it’s full, with tables draped in white, set with light flatware and slick black napkins, and furnished with ’60s-style dinette chairs.

An extensive dinner menu goes well beyond Cajun and Creole to incorporate traditional Southern dishes, Italian and German specialties and more. Main dish prices run mostly in the teens, topping out at $23.95 for veal Wiener Schnitzel with potato pancakes and braised red cabbage, described as “a Germantown favorite.”

I recommend browsing the menu for the Louisiana fare that is Lowe’s specialty, including such goodies as New Orleans-style barbecued shrimp ($21.95); gulf shrimp in a spicy tomato Creole sauce with rice ($19.95); crawfish Étouffée ($19.95); and an oyster pan roast ($18.95), which includes oysters poached in a rosemary and bacon cream with French bread, a confection the Coach Lamp chefs dub a “Cajun Hot Brown.”

There’s an ample selection from the bar, and Cajun fare, after all, is traditionally served with ice-cold beer in longneck bottles. Wine lovers, however, will find a short but adequate list with selections in the $20 to $30 range.

The lunch menu offers a good selection of appetizers, main dishes, sandwiches and burgers, with plenty of Cajun options, attractively priced under $10, with the exception of the $11.95 fried seafood platter, a smorgasbord of catfish, oysters, shrimp and frog legs.

At the risk of building a craving that can’t be easily sated, I’ll briefly describe Chef Lowe’s special Cajun banquet. Chances are, given notice and a reservation, he would be happy to re-create them on request. It was an expansive, all-evening dinner featuring seven courses:

•Angels on Horseback — An appetizer of the ’70s that, Lowe says, remains popular in Acadiana. The combination of crisp bacon wrapped around fresh oysters, dusted with piquant spices and fried, can be mighty addictive.

•Meat Pies — Available on the lunch menu as a $5.95 appetizer, these are fried pastry half-moons stuffed with spicy ground beef and topped with a faintly piquant creme fraiche.

•Redfish Court Bouillon — A dish that sounded as if it might be light and delicate but that proved to be deliciously robust; basically a thick, spicy fish stew.

•Stuffed Mirliton — The base of a round Louisiana squash hollowed out, stuffed with cooked squash, veggies and spice, and baked until steaming.

•Blueberry Cake — At this point I was full, so all I can remember is that this white-frosted yellow cake filled and topped with fresh blueberries was quite good.

We returned for lunch another day and started out with a tactical misstep, ordering a plate of fried artichokes ($6.95) to share. Vertically slivered, cornmeal-dusted, deep-fried artichokes were addictive, and there was a boatload of them. Creamy, steaming artichokes cloaked in spicy, crunchy breading, they were so good that we ate them all, dipping freely into the ranch-style buttermilk dressing and soon realizing we had left little room for our sizable entrees.

Mary’s choice, fried chicken ($8.95), was lightly breaded and crisply fried, juicy and tender with just a hint of Cajun spice. Red beans and rice served alongside in a ramekin were delicious, but went home in a box. Green beans with bacon were long-cooked and salty; mashed potatoes were dense and garlicky.

My Cajun pick, jambalaya ($8.95), was the best I’ve had since I last lunched in a diner in New Iberia. It was a traditional mix of spicy rice baked with tomatoes, “holy trinity” and spices, thin slices of smoked sausage and a good ration of perfectly cooked tailless shrimp (chicken is the alternative).