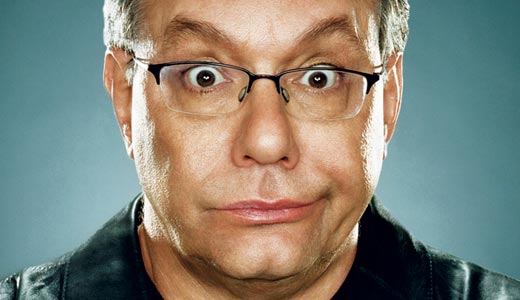 Lewis Black might be one of the most recognizable faces in comedy these days, whether for roles in movies like “Accepted” or “Man of the Year,” or his recurring appearances on “The Daily Show with Jon Stewart,” or even Black’s own Comedy Central series “The Root of all Evil.” Regardless, with several albums and DVDs under his belt, Black brings his astute, schizophrenic and sometimes controversial brand of comedy to the Louisville Palace on Friday.

LEO: You described your comedy as “being on the Titanic every single day and being the only person who knows what is going to happen.” Is it really that bad in your mind?

Lewis Black: Nah, it’s not that severe; it is when I’m a comic, but otherwise I’m OK. I think there’re a couple more days we’ll be afloat.

LB: I think they’re obscene. Obscene is too much, that’s over the line — but I don’t get ’em. I don’t understand ’em. I don’t know why someone feels the need to describe their day. The final straw was when my agents called and said you can get paid to Twitter. I thought: Oh please, this is reaching epically bad proportions.

Then I heard that one of those “Girls Next Door” was making $2 million a year Twittering. If that’s really true, and we can’t raise enough money to get a school done? I don’t get it. We can’t pay for the war in Afghanistan, but we can pay to Twitter?

LEO: You’re known as an intelligent, political comedian. What is it about the more crass guys that appeals to the public?

LB: I just think anything that kicks your brain around in a way is probably attractive to people. It’s the way the world goes — sometimes the joke needs to be more twisted to get the shit out of your head.

LEO: How important is it to be on the road for a comedian?

LEO: You do work with Cartoon Network, History Channel and Comedy Central — is it hard not to dip back into your regular vocabulary?

LB: Nah, because that’s the gig. But when I’m doing a live show, and somebody really has the choice to come in, I think it’s completely different. But I’m on the radio all of the time, there’s just a part of my brain where I throw the switch and the words stay in a box. You know people get a sense, like on “The Daily Show,” of what I’m thinking … they can fill in the blanks. They know where the frustration is leading me.

LEO: In retrospect, do you still feel like the Kennedy Center’s request to limit your use of “fuck” was a violation of your rights?

LB: Well, it wasn’t really a violation of my civil rights; it was just stupid. It’s an adult room, adults are going to come there, adults can choose if they’re going to bring their children or not. When I was a kid, I was trying to find comics (who were) like myself — George Carlin didn’t destroy my mind, he opened it. Language is the least of our problems at this point.