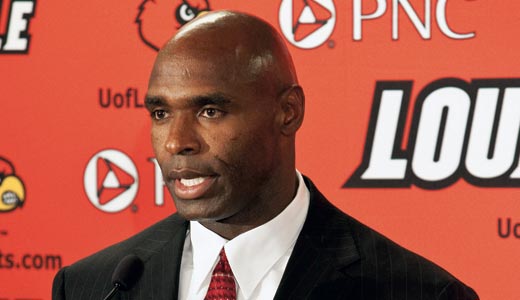 A calendar hangs on the wall by the four repair bays at Cecil’s Chevron downtown. Notated prominently — in thick black marker — are the dates and starting times of U of L games. Other matters are in regular ink.

Johnny Cecil is a Cardinal fan.

He has season tickets. He goes to away games when possible. He’s paid tuition for his kids to attend the university.

The morning after Charlie Strong’s introduction as Louisville’s new football coach, Cecil was smiling once again.

“I tried to watch the press conference on my computer here,” he said. “Then I listened on the radio. I watched on TV last night.”

“I like that he’s seasoned,” he continued. “I like that his recruiting strength is in Florida and areas in the South where Louisville needs to be recruiting. I never understood how we’d get kids from out West to come here.”

Then there’s the topic mentioned in nearly every conversation about Strong’s introduction as U of L’s new football coach, the 10 seconds of immediate Cardinal lore known as The Moment.

At the press conference, Strong was speechless and fought back tears when acknowledging his fears that a head coaching position he’s long craved might never have come.

He was surely remembering the jobs he interviewed for but didn’t get despite his résumé. Like Minnesota, where he was interviewed under the guise of being a candidate for a job already filled.

Strong allowed his emotions to take charge. It was a stunning, deeply human moment.

Johnny Cecil was touched: “I could feel it.”

How ironic then that the instant that has galvanized a fractured Cardinal football fan base was a tender interlude punctuated by tears of joy. Many have mentioned how Strong displayed more emotion in those dozen silent seconds than his mechanical predecessor did in three years.

The consensus from every corner is that Tom Jurich made a great choice. “Maybe a perfect fit,” says Wildcat, his online name notwithstanding, a major U of L pigskin supporter.

But, as Cecil acknowledged, “A new coach is always a crapshoot.”

Strong has never been a head coach. (Not that such a line on one’s résumé assures success, as Cardinal fans well know. Exhibit A: Ron Cooper. Exhibit B: Steve Kragthorpe.)

But Strong has had stellar mentors. Steve Spurrier, Lou Holtz and Urban Meyer all coached national champions. Seth Hancock has been an icon in the thoroughbred industry for decades.

The fellow knows how to coach ’em up on defense. In one BCS title match-up, Strong’s Gator defenders held Ohio State to 82 yards, bashing the favored Buckeyes 41-14. In last year’s title game, Charlie’s charges held Oklahoma, the most prolific offense ever in college football, to 14 points. This season, Florida was top five in four different defensive categories.

Yes, the statistics are there.

The leadership and defensive coaching talent are there.

Yet fame and fortune are fickle. Favorable outcomes are never a foregone conclusion. Strong has been left a woefully bare cupboard. The current U of L squad may be earnest, but it is thin in numbers and lacking sufficient championship talent.

In this Internet age, when the next latest and greatest is but a mouse click away, fans want microwave-fast gratification — yesterday. Adulation such as Strong is now experiencing can be fleeting. Loyalties change as quickly as some pseudonymous blowhard can make up a rumor in a chat room.

Alum and longtime fan Fred Smart observes, “We need organization and inspiration. We need to get the fans unified. And we need players.”

The fans seem united for now, and hopefully beyond next season’s inevitable setbacks.

Organization, staff selection and recruiting are among the many variables to be revealed between now and spring practice. (Early returns are positive. Strong nabbed a four-star quarterback within 24 hours of his hire.)

Steve Kragthorpe, like a vampire, sucked the lifeblood out of the program.

If Charlie Strong repairs Louisville football as well as Johnny Cecil repairs cars, Cardinal fans are in for a grand tour.