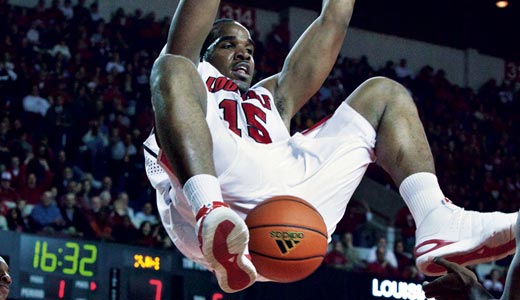 What’s a Louisville fan to do?

Here’s a Cardinal team with a slew of guards and a center. A team that lost three games before Christmas and hasn’t had a sniff of a national ranking since losing to Western Carolina. Not North Carolina. Western Carolina. Now comes Kentucky: They’re undefeated (as of press time), ranked third and looking to be No. 1. They beat North Carolina (not Western Carolina), chalked up the school’s 2,000th victory, and have a new coach with an excruciating habit of winning most games. Plus a re-stocked roster of sleek stars led by freshman guard John Wall, who can’t be stopped.

Of course, a rational voice might note that winning or losing to Kentucky on the first weekend in January isn’t nearly as important as playing well for the next two months in the Big East Conference to get up a head of steam for the NCAA tournament.

But no Cards fan wants to see her team roasted, toasted and hung up to dry in the rafters of Rupp Arena.

And it could happen.

After all, the star forwards from last year’s 31-6 juggernaut that won the Big East championship and earned the No. 1 overall seed in the NCAA tourney are gone. Both Terrence Williams and Earl Clark were selected in the first round of the NBA draft and were not immediately replaced with new star recruits.

“We have no eraser, no shot blockers,” says U of L coach Rick Pitino. “If we made a mistake last year, we had T-Will and Earl to step in and erase the mistake. When you’ve got no eraser, you’ve got to be fundamentally sound — five guys who work together, with good fundamentals at both ends of the floor.”

Pitino, as always, is preaching defense and asking his players to turn up the temperature full-court. An all-out assault two Saturdays ago produced a runaway 102-75 victory over Western Kentucky — and it was a reminder of the kind of withering, bothersome, sometimes chaotic full-court press that fueled Louisville last year.

But if it was defense that lifted Louisville to a league championship, a less-than fearsome offense proved its undoing in the tourney. Michigan State played Louisville straight up, man-to-man in the Midwest Regional final, and the Cards couldn’t score enough points (52) to win.

That’s the bad thing about depending on defense. It’s great in the Big East Conference, which is characterized by rocking collisions and tall trees planted in the lane to prevent any kind of drives. And it’s great if you like blood and dunks. The gladiator spectacle.

But to beat top teams like Kentucky, you have to be able to score.

Pitino knows that and has been asking his team to put the ball in the basket. “I would rather have a great offensive team and keep working on the defense,” he says.

“Defense is hard work,” says Pitino. “It’s effort. It’s understanding the schemes you have in, and our guys just don’t understand it all right now.”

Lack of press mastery was on full display when Charlotte whipped Louisville by 22 in Freedom Hall in early December. Charlotte guard DiJuan Harris logged 39 minutes with just one turnover, dribbling around and right past Louisville’s full-court press.

The team is young, but there sure are a lot of them. Ten players are averaging more than 12 minutes a game, although the balance is lopsided. It’s a team with so many terrific guards — starting with senior Edgar Sosa — it is hard to count them all. But the few Cardinal forwards are unheralded replacements.

Which brings us to the center of things — Louisville center Samardo Samuels, along with the other center, Terrence Jennings. Both are 6-foot-9 sophomores, and both are currently enrolled full time in the Rick Pitino School of Motivation.

“A lot of people are down right now on Samardo Samuels — and it’s very easy to do,” Pitino says. “You look up the road right now and see John Wall, who is a freshman and doing great. John Wall is the No. 1 player projected in the (next NBA) draft. He’s a specimen. He’s got speed. He’s got size. He’s tremendous. You read all the clips and he’s the No. 1 player alive. But most freshmen aren’t like that. Samardo is just a sophomore himself. He’s got two more years to develop. When he came out of high school he was the biggest and strongest in his class. Now size doesn’t matter.

“Samardo is disappointed in himself right now because he’s not a mega-star,” Pitino continues. “That’s the thing about all the technology these kids grow up around. Facebook and Twitter. They hear all these things and believe what people are telling them they should be. Then when it doesn’t happen, they get down on themselves.”

For his part, Samuels is soft-spoken and serious.

“Coach Pitino had a talk with me, and it really helped,” Samuels says. “I’m understanding better what I need to do, what the team needs me to do. It’s up to me to make myself be the player I want to be.”

“In high school, it’s enough to check your man out, get position and rebound,” explains the coach. “But in college, a rebounder has to do more than check his man. He has to sky above the rim. That’s where the rebounds are, where the game is played.”

It looks like the heart-to-hearts are working: In recent games, Samuels has scored and rebounded, and is running the court. There’s an old adage around Louisville basketball that says if your center beats their center up the court on every play, that’s a big advantage. Samuels runs like a deer.

In contrast, Louisville’s other sophomore center, Terrence Jennings, is one of the big trees of basketball: not nearly as mobile, but stout of trunk, long of limb, and built for battle in the tall timber of the Big East.

Jennings was a force late last season, but Pitino says instead of working on his interior game over the summer, Jennings practiced his three-point shot.

The coach shakes his head.

“A wise man on a corner in New Orleans told Terrence, ‘You are someone who is going to make the NBA by blocking shots, getting a low-post game, playing great defense, being a great rebounder. So you know what you need to work on? Your three-point shot.’”

Pitino’s wise-guy humor is all part of the plan to motivate Jennings, but you can see the big man isn’t all that amused. This Saturday could be just the perfect time for the motivational tactics to pay off, with Jennings working alongside Samuels to stymie Kentucky’s tall tandem of Patrick Patterson and DeMarcus Cousins.

So now we’re back to Kentucky.

Well, of course. It’s always back to Kentucky, isn’t it?

Rather than worry over what horrible skinning might await the Cards in Cat Land, Louisville fans might recall it was a victory over Kentucky last season in Freedom Hall that launched Louisville’s banner run through the Big East. Kentucky played a bit better than expected, and Louisville was a tad shaky in the final minutes — until Edgar Sosa solved everything by swishing a long three-pointer at the buzzer to beat UK 74-71.

Louisville fan George Brakmeier hasn’t forgotten that moment. If some of his brethren are checking flights to Bermuda, or reading message boards with news of U of L football recruiting to avoid thinking about how bad things could be, Brakmeier is hoping for more than just a respectable showing. He’s looking to get lucky.

“What I’d like to see is a Louisville win,” Brakmeier says. “Wall has a great game, but Samuels outplays Patterson for the victory.”

And there you have it. The Big Game comes down to the Big Men. So why worry?