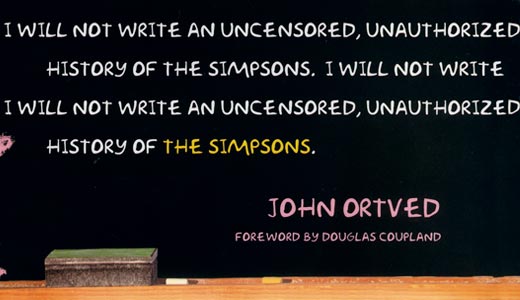 If you watched FOX Television a few Sundays ago, you probably caught the latest from two of the network’s biggest shows: “The Simpsons” and “Family Guy.” The former featured Homer and Marge Simpson going through marital trouble but ultimately reconnecting in a loving embrace as the end credits rolled. The episode of “Family Guy” closed with sex-maniac Glenn Quagmire giving up his illegitimate daughter for adoption, and briefly pondering if he’ll run into her in 18 years … wink-wink.

Times have changed. Twenty years ago, conservative groups painted “The Simpsons” as an all-out attack on American family values, so it’s strange how tame the show is perceived in today’s world of “South Park” and Adult Swim. Somehow those bug-eyed, yellow-skinned symbols of rebellious counterculture morphed into a well-written but non-threatening animated sitcom family. For many years, die-hard “Simpsons” fans have been asking: What happened? While the search for that answer is not the stated purpose of this new book by author John Ortved, it is a theme he returns to often while exploring the cartoon’s origins.

Instead of writing a textbook, Ortved presents an oral history by assembling the story as a series of quotes from more than 75 people involved with bringing Springfield to life. Those interviewed range from FOX CEO Rupert Murdoch to Conan O’Brien, a former “Simpsons” writer who now hosts “The Tonight Show.” But there are some noteworthy exceptions, including “Simpsons” creator Matt Groening.

Pretty much every “Simpsons” bigwig currently in charge of the actual show declined to work with Ortved. But their voices are still woven into the narrative from outside sources, everywhere from Playboy interviews to DVD commentaries.

Despite that editorial roadblock, the most welcome aspect of Ortved’s take on Simpsons’ history is what it does not cover. Most magazine stories and TV documentaries tend to focus on the show’s award-winning voice actors or laundry list of A-list guest stars (remember when Paul McCartney gave Lisa a vegetarian pep-talk, or when Michael Jackson wrote Bart a chart-topping pop song?). Moments like those are mentioned here and there, but this book is much more about the writers and producers — exploring their genius, their shortcomings and their good ol’ American office dramas. Turns out working on “The Simpsons” is very much like your job.

For instance, while Groening created “The Simpsons” template, most of the people interviewed agree that he was not the sole reason the show found success — or even existence. Groening was a cartoonist, but he didn’t know how to make TV. A lot of the credit for fleshing out the actual show seems due to producer James L. Brooks and writer Sam Simon. But since Groening was the rags-to-riches story, the media liked to focus on him as “The Simpsons” mastermind rather than the many TV veterans who made the show a success. And along with that success came the inevitable power struggles, creative clashes and resentments behind the scenes. The misunderstood workers angry at management? Sounds like the basis for many a “Simpsons” plot.

Of course this is the classic “grain of salt” scenario. Without self-defense from Groening, Brooks and Simon, the history remains incomplete. At the same time, without that involvement from the three “Simpsons” titans, the story might be more honest.

The bottom line is that after 20 years, “The Simpsons” is big business. And like any institution, it has generated rewards for some and heartache for others, everything from bitter lawsuits to the end of close friendships. The odd thing is, you walk away from the book feeling like this may just be how it’s done in “the business,” the price you pay for unbelievable success.

As for the diehard “Simpsons” fan who probably already knows every backstabbing rumor, it’s still a perfectly cromulent book.