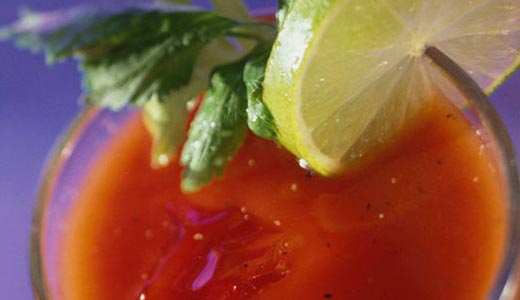 I like ’em spicy. I like ’em juicy. I like ’em loaded with goodies, heavy on the Worcestershire and thick like a porter on a cold day. This time of year goes perfectly with the succulent beverage. And like gambling at a Catholic picnic counts as going to church, I firmly hold to the belief that downing a Bloody Mary delivers as a major source of vegetables. It’s a meal, in fact. And it is also known in some circles as a healer, an enabler, a beacon of light on a dark, hazy morning. It’s the Oprah of cocktails, and it’ll be around long after 2011.

Many places in Louisville make decent Bloody Marys, which I will now refer to as BMs (not to be confused with the bodily function also known as BM, which, speaking of, BMs can help keep regular). Outlook Inn has long held the title of Best BM in Town. Wick’s has a substantial one, as does the Back Door (served with a pickle). You can pair the drink with your favorite wing sauce at BW3’s for a good time if you’re, say, shopping at a stripmall.

As any BM connoisseur knows, there are no two alike. Some use horseradish, some are rimmed with celery salt, some are heavy on pepper and loaded with peppers. This variation of species makes the BM a prime candidate for DIY experimentation.

Bank Street Brewhouse in New Albany now offers a Build-Your-Own Bloody Mary Bar on Sundays. Pull up a seat and concoct the cocktail of your dreams. Last Sunday I was feeling under the weather from too much disco sticking at Connections the night before. So I rolled out of bed, pulled on my “Easy Like Sunday Morning” T-shirt and made my pilgrimage north. Bank Street Brewhouse is just a few turns off the New Albany exit on I-64 (you know, the boat exit). A little brother to Rich O’s, BSB is owned and operated by the same folks who run the New Albanian Brewing Company off Grant Line Road.

From noon-3 p.m., BSB sets up a fairly elaborate BM bar with all the trimmings … and then some. For $7, you fill a 20-ounce pint glass with as much or as little spices, veggies, salts and tomato-juice base as your throbbing headache demands. Want it spicy? They have a half-dozen Tabasco-esque sauces to choose from. Decorate your BM rim with celery salt or smoked sea salt. Shake in some Worcestershire, Pickapeppa or Sontava Habanero. Then move on to the garnishes, for god’s sake. What have you? Pickled asparagus, thick-sliced barrel pickles and pickled beans, to name a few. Chef Josh Lehman is out to make BSB more than just a corner pub, so you also have Prosciutto-and-mozzarella-stuffed olives, anchovy-stuffed olives, blue-cheese-stuffed olives and sun-dried-tomato-stuffed olives.

Basically, I just threw everything in, save the anchovies, and mixed it up. I took a seat, and the bartender added a shot of Hangar One vodka. My only complaint was that adding the vodka last, after you have mixed everything together, threw off the balance and taste of the drink. I had to stir vigorously to get the vodka to mix and not settle at the top. (Tip of the day: If the sun’s out, nothing should be settling at the top unless you’re on vacation in Key West.)

I got a Facebook invite to this “First Annual Highlands Beer Festival” event that I thought I’d pass along. I have no idea who is behind it, but it takes place at the Valumarket in Mid City Mall. I know they have a kick-ass beer cave, so perhaps it’s in there. It’s from 4-9 p.m. on Saturday, Dec. 5. Stash some cash in case there’s a fee for a sampling glass. The list of participating brewers is a mile long, so I’ll just pick a handful: Rochefort Trappist, Magic Hat, Bitburger, Duvel, Rogue, Avery, Upland, Hoegaarden, Samuel Smith and Goose Island. I’ll probably see you there — with the same confused, beer-thirsty expression.

•“He wants his ego stroked … under the table”

•“i gt cght wth my hand n the nookie jar”

•“Haha dude i so did not send you that text earlier … my phone got hacked ;)”

•“Again … not me. These motherfuckers are trying to make your column”

Keep sending them to [email protected]leoweekly.com! Check out my daily reasons to drink at barbelle.leoweekly.com.