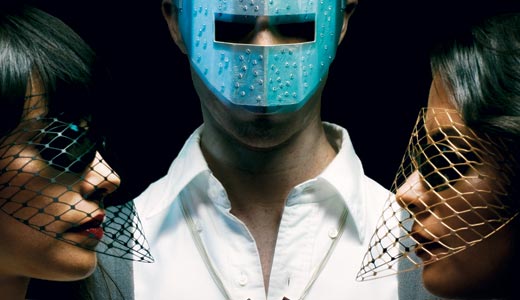 School of Seven Bells is an institution for pickpockets, and it’s also the team of Ben Curtis and identical twins Alejandra and Claudia Deheza. Alpinisms, their debut, is part dream sequence, part inspirational sex techno. Curtis formed the group after leaving The Secret Machines, and SVIIB’s sound has been tagged as an offshoot of the C86 Movement, named after the cassette compilation released by venerated UK rag New Musical Express to chronicle the mid-’80s independent rock scene.

The Bells began work on their second album, Disconnect From Desire, this month, but an alternate version of Alpinisms is out now. Curtis chats by phone from New York.

Ben Curtis: Yes! Stoli Vanilla, lime, Amaretto and milk. You have your calcium. You’ve got your citrus. You’ve got you alcohol, which is good for the mind, I hear.

LEO: What was the goal this time, after debut EP Face to Face In High Places?

LEO: Are you guys settling in, I guess?

BC: No, not at all. With that you become more intolerant of parts that aren’t as good. It’s harder than settling in.

LEO: Alpinisms is dedicated to Alejandro Elias Deheza-Herren. Who is he?

BC: Claudia’s son. He’s an awesome dude, and you can hear him in the background. He’s not a quiet kid. (laughs) He was too young to understand that when the mic’s on, we’re recording. The album is dedicated to him.

LEO: Any dish on the new record?

You Are All Perceivers is the new album by The Mandelbrots (myspace.com/mandelbrotsmusic). Guitarist and singer Joseph Burchett stops in to talk about the new album. Listen at Bluegrass Catastrophe, bluecat.leoweekly.com.