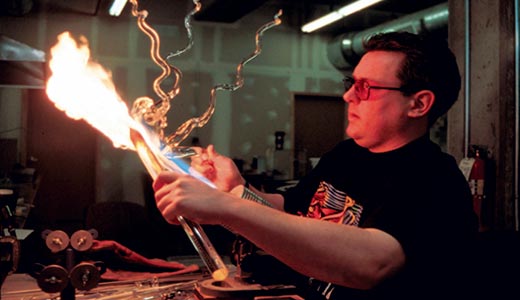 You have to love what you do when getting burned is part of your daily activity. “A handful of times, I’ve been seriously burned,” says flameworker Mark Payton of Payton Flameworks. “It’s always part of it.”

He moves among three lit torches, working on one then jumping to another. It is nerve-wracking for spectators but just another day of the office for a flameworker.

Payton qualifies as a “master flameworker,” although he is quick to downplay the whole “master” idea. “I’ve been doing it for 21 years. Master is nothing but a promotional thing.”

Flameworking, also known as torchworking and lampworking, is reshaping rods of glass with the heat from a blowtorch. The glass, once heated, is twisted, cut and stretched.

“When I was 10 years old, I used to watch a guy in Mall St. Matthews,” Payton says. “He made swans. That always stuck with me. I took high school art, but that was just a place to play around. Nothing in college (at Lindsey Wilson College in Columbia, Ky.). I started out as pre-med … then changed to theater. Couldn’t figure out what I wanted to do.”

But his childhood interest in glass eventually found a way back into his life. He is self-taught in flameworking, explaining that when he started, “there wasn’t a place in Louisville to take a class.”

He found some old art books from a vocational college and then ordered equipment, piece by piece, from glass-supply stores. “I bought a torch first,” Payton remembers. “Just started in my bedroom making anything I could think of. My first professional studio was at a flea market.”

He began Payton Flameworks in 1989 and then started doing wholesale and retail shows to sell his work. His business took off around 1991. After relocating several times over the years, he moved into the Glassworks Building in 2001.

“I built my business on my production creations,” he says. These bottle stoppers, fan pulls and lamp finials are the backbone of Payton Flameworks. He usually introduces 10 new designs a year as well as 10 new color combinations.

In the last three years, he has been selling more of the larger gallery pieces as well as corporate and custom work.

“My pieces, like the sculpture, deal with the figure — that’s what I like to draw. The figure transforming into things, that’s my trademark — that’s why the pieces look like they do.”

Payton incorporates the figure in a different way in his “Circle of Friends” mirrors. It started out as a commission for a friend, but its popularity led him to re-create it by changing the leaves and shapes.

Payton’s biggest project, as well as the largest flameworked sculpture in the world, is the “Dancing Blue Fountain” at Blue Harbor Resort and Conference Center in Sheboygan, Wis., a resort near Lake Michigan. It took Payton and his assistant Ben Taylor almost a year to create and complete all the separate components in 2004.

As you might imagine, Payton has been hit by the recession. The last couple of years have been hard for him because many of the galleries that featured his work have closed.

But since his favorite theme is transformation, there’s no doubt he will change with the times. “After rest and reflection, you can redirect yourself. We are the only people that can change ourselves.”