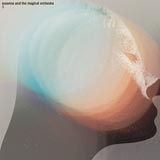 The tone of 3 is consistent to a fault, defined by its distinct lack of presence — melodies so abstruse they seem to disappear completely; backing tracks so muted and inscrutable that the vocals may as well be a cappella. This is what makes the pair’s surprising cover of Rush’s “Subdivisions” such a welcome addition — not only does it contain the strongest, most well-defined melodies on the album, it also provides 3 with some much-needed tonal variety, since the original’s burning urgency can’t help but rub off a little on the group’s characteristically placid reading. It’s tempting to say 3 emphasizes atmosphere at the expense of creating memorable songs, but on the whole, the record is too innocuous to warrant such criticism. Ultimately, the album’s biggest caveat should be a warning against operating heavy machinery.