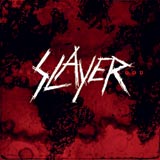 There’s something comforting about a new Slayer disc. You know there won’t be anything unwanted. Along with The Ramones, AC/DC and Motorhead, Slayer epitomize the axiom, “If it ain’t broke, don’t fix it.”

On World Painted Blood, Slayer’s 10th studio album, Dave Lombardo is still the king of the double kick-drum. Jeff Hanneman and Kerry King play with speed and aggression. Tom Araya keeps up on bass while simultaneously screaming his lungs out. Business as usual. This is not a criticism; when perfection is attained, don’t fuck with it. While Slayer are undeniably heavy, they still manage to be melodic and structured. (Hard to believe we’ve come so far that Slayer is the accessible end of thrash metal.) Lyrical concerns? Japanese war crimes (“Unit 731”), America’s place in the modern world (“Americon”), Russian serial killers (“Psychopathy Red”) and all the usual feel-good topics. Thematically and stylistically, World Painted Blood is a consistent album in itself and within the Slayer catalog. It takes considerable skill to create, develop and master a style as seamlessly as Slayer has done. Consider World Painted Blood the latest chapter in the ongoing saga.