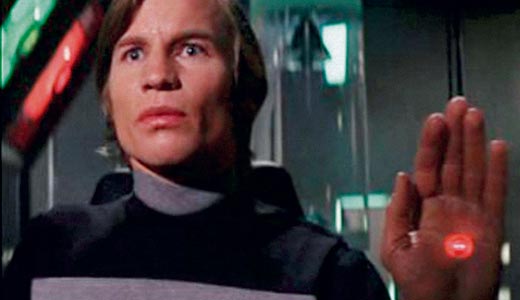 Long overdue Blu-Ray release of this colossally dumb big-budget ’70s sci-fier. While set in the 23rd century, this flick was able to accurately forecast daily life in the 21st century: mall-dwelling fashion victims vs. supercomputers bent on world-somethingorother. With Michael York, perky little Jenny Agutter, Farrah Fawcett-Majors (wouldn’t be the ’70s without her) and Roscoe Lee Brown as the tin man. Life ends at 30. Ain’t it the truth, ain’t it the truth? (BTW: Director Michael Anderson is the nephew of Shakespearean actress Mary Anderson, after whom the Mary Anderson Theatre in Louisville was named.)

First Blu-Ray release of our favorite contemporary vampire movie. As directed by Kathy Bigelow, an innocent hayseed is seduced by a young girl (been there), part of a pack of vicious vampire drifters meandering the roads of the Midwest. Lance Henriksen and Bill Paxton are terrific as savage redneck, blood-drinking, Civil War relics with Jenette Goldstein as Lance’s main squeeze, Adrian Pasdar as the boy, lithe Jenny Wright as the girl, and the always aromatic Tim Thomerson as the boy’s hero father. Possibly the best vampire flick since Bela donned the cape.

All 127 episodes on 24 discs plus bonus goodies including a CD of selected songs from the soundtrack, interviews with creator Kevin Williamson and scenes of Dawson playing with himself deleted from the pilot episode.

EATING OUT: ALL YOU CAN EAT

This marks a milestone in gay cinema: the first queer movie series to become a trilogy. Tiffani and Casey lure in hunky Zack with a phony online profile of Tiffani’s ex-boyfriend … until the ex shows up, spoiling all their plans! With guest shots from Mink Stole and Leslie Jordan.

A docu-look at MoveOn.org, the grassroots political movement that “rocked the foundations of the American political system” and claims to be responsible for getting Barack Obama elected. Wow, and we thought WE had inflated egos! Interesting and upbeat, though the constant self-aggrandizement gets silly after a while. We suggest taking a shot each time they profess greatness.

SHOW ME YOURS: THE COMPLETE SERIES

The original Canadian version was scrubbed of nudity and obscenity before being shown on Oxygen, so here’s your chance to see Rachael Crawford and Adam Harrington get all hot and bothered while researching “what do people find sexually inspiring and provocative?” Luckily, they never uncover all the answers. Only 16 episodes and two seasons, which is a shame.

Meant to be a breakout role for Ashton Kutcher, this got dumped to video rather unceremoniously by its studio. He plays a vacant sex-toy for any woman who wants him (and, apparently, a lot of them do), only beginning to recognize the shallowness of his life and the barren, lonely future that awaits him. Costars Anne Heche (who gets her snatch snatched), beautiful Margarita Levieva, sexy Sonia Rockwell, Maria Conchita Alonso and more.

Aka “Summer’s Blood,” this cautionary tale of a young woman (“Twilight”’s Ashley Greene), entrapped by a demented handyman, is marketed to teens as an escape/revenge flick, but it’s actually much better than that. Though obviously re-edited to the point of confusion, the handyman, played by the great, underappreciated Stephen McHattie, isn’t a baddie, he’s just a lonely guy who does the right thing for a person in need and then finds himself losing control. Much deeper than you’d expect from the cover.

We really liked this pairing of Kelly MacDonald and Michael Keaton (who also directs). She plays a woman fleeing an abusive husband who settles in Chicago, where she, quite by accident, interrupts Keaton’s suicide. It turns out that he is a former hitman, now filled with remorse, being tracked by a dour detective (Tom Bastounes). A solid little movie with talented people.

As regular readers know, we’re not big fans of Gerard Butler, but he’s damn good in this silly “battle of the sexes” outing with sexy Katherine Heigl. She’s a busy TV host who believes there’s a perfect man out there for her. But he knows the truth: Men are only interested in sex. She makes a bet to prove him wrong, only to find herself drawn in by Butler’s irresistibly cocky maleness. Sure, it’s obvious, but it’s also a lot of fun with great costars and a clever script. We liked it.

For the uninitiated, the legendary “Tora-San” is the second-longest-running movie series in the world, comprising an amazing 48 films. Each usually starts with Tora-San, a traveling salesman, coming into a new town where he will meet a beautiful young woman. He will tell her, “If you ever need help, please come find me” at his home, where his family is less than thrilled with his wandering lifestyle. Of course, the women inevitably do come to call, and he falls in love with them. But in helping them, they always find their own true love, leaving Tora-San once again on the road to a new town. This set contains the first four films in the series. Recommended.

Another homerun for the always-reliable Pixar. Ed Asner voices Carl, an aging balloon vender, lost and alone after the death of his wife, Ellie. He sits in his museum of a house, resisting change from within and without, lest he lose one cherished memory. But the world has other plans, eventually leading him to attach balloons to his house and head for South America, the site of he and Ellie’s unfulfilled dream adventure … with an unexpected hitchhiker. One damned fine movie.